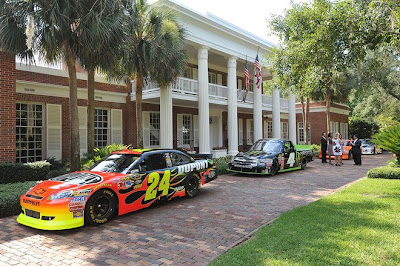 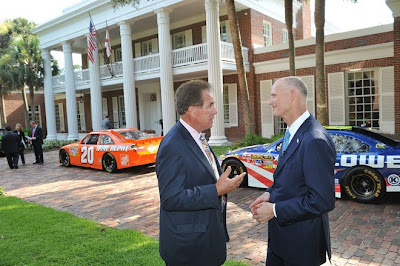 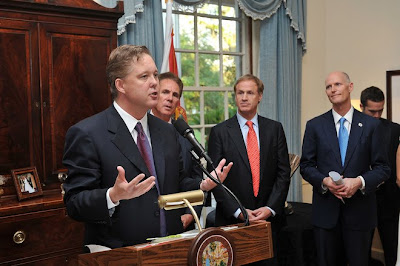 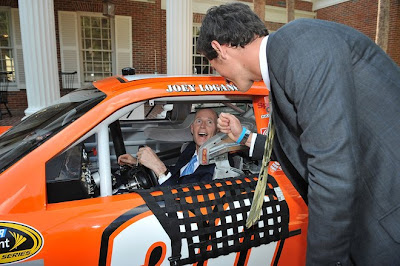 Both the Nationwide and Sprint Cup Series get on the big oval in Daytona Thursday with live TV coverage from SPEED and ESPN2. It should be interesting.

Before the action got underway, Brian France led a NASCAR delegation to Tallahassee, FL. The group included ESPN's Rusty Wallace and Darrell Waltrip of SPEED and FOX Sports. They met Governor Rick Scott at his official residence to promote the upcoming Daytona race and confirm NASCAR's economic impact on the state. Those are the pictures above courtesy of Rick Dole and Getty Images.

There has been much discussion that this time around, teams have actually planned well in advance their two-car strategies for the very strange tandem racing we are seeing at Daytona. No more random partners and radio chatter. As they say in the movies, this time it's for real.

While there were some teams able to get together in the past race, this Thursday coverage of multiple practice sessions should show teams tipping their hand. These cars simply have to go out and practice racing at speed and switching position to keep the engines from overheating.

Topics under discussion will be the heat of the track, the wear of the tires and the issues associated now with this tag-team approach to racing. It has been reported that deals have been made among teammates and within organizations for many weeks now. This time, it's a scripted ballet.

The complete TV schedule for Thursday is posted on the left side of the page. There will be news items added throughout the day, so check back for updates. To add your TV/media-related comments at anytime, just click on the comments button below. Thanks for taking the time to stop by The Daly Planet.