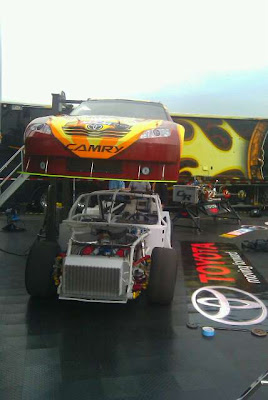 This is the final TNT tune-up before the network's big show at Daytona on Saturday night. The New Hampshire Motor Speedway has been known as a single-file flat track, but later today it might be called the payback track by the media.

Tempers are tight and a superspeedway looms next week, so paybacks are on the agenda and making headlines in the media. Lindsay Czarniak starts the TNT coverage at noon ET with Kyle Petty and Larry McReynolds on the panel. Petty injured his leg on a kayak trip this weekend. Look for the TNT crew to bring that up.

Dale Inman is the subject of the Pride of NASCAR feature. Denny Hamlin is the on-set driver interview. Wally's World will provide a course description. Lindsay Czarniak takes a ride with Jeff Burton.

The challenge of the TNT team will either be to create excitement from what has been a traditionally boring race or try to keep track of the "have at it boys" paybacks that may start early in the event. Kind of interesting not knowing what might happen after the green flag waves.

Loudon works great on TV. The low angle shots show the speed while the in-car cameras are super for the tight racing. A straight pit road makes for a good triple-split on the caution flag pitstops that are normally a key to the race.

While Sonoma lent itself to the commentary from Dallenbach, it will be Petty who is in the lead this week on a flat one-mile track. It has been ten years since Kyle's son Adam Petty lost his life in a pre-race accident at this facility. Petty stated earlier that it was on his mind. It certainly should be.

This post will serve to host your comments about the TNT coverage of the Sprint Cup Series from the New Hampshire Motor Speedway. To add your TV-related opinion, just click on the comments button below. This is a family-friendly website, please keep that in mind when posting. Thanks for stopping by The Daly Planet.
Posted by Daly Planet Editor at 11:30 AM 213 comments: 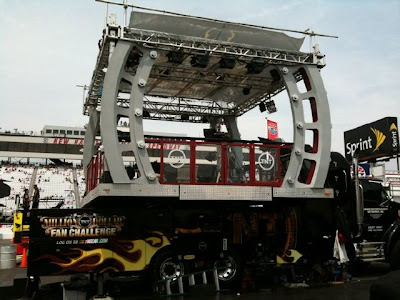 Things get underway early on Sunday as both SPEED and ESPN2 offer NASCAR programs at 8:30AM.

At 10AM, Jimmy Spencer returns to RaceDay for two hours of pre-race programming live from the SPEED Stage at the New Hampshire Motor Speedway. John Roberts hosts with Kenny Wallace on the expert panel. Wendy Venturini and Hermie Sadler are the reporters. Darrell Waltrip returns to this program next week.

TNT opens with the Countdown to Green pre-race show at noon ET. Lindsay Czarniak hosts with Kyle Petty and Larry McReynolds. Czarniak takes some laps around NHMS with Jeff Burton while Denny Hamlin joins the gang in the infield for an interview. The Pride of NASCAR feature will focus on Dale Inman, the legendary crew chief for Richard Petty who won seven championships.

The popular RaceBuddy online application returns as does the Million Dollar Challenge. Both of these are accessed through the NASCAR.com website and are free. No one has yet won the million dollars, which involves picking the top ten finishers in order. No info yet on which driver will carry the RaceBuddy in-car camera.

Adam Alexander has been coming into his own during this first swing at handling the play-by-play for the TNT races. This week, the challenge of the flat New Hampshire track is going to be huge. There is little passing, the pit stops tell the story and in the Sprint Cup Series tempers are hot after Sonoma.

Petty and Wally Dallenbach Jr. give Alexander lots of room to operate. Unlike the NASCAR on FOX gang, the two analysts stick to commentary and opinion. This has really helped Alexander to get comfortable quickly. Things seem to be falling into place quite well with Daytona right around the corner.

The TNT crew will again move to NASCAR.com after the checkered flag for some extended post-race live programming. This can also be accessed by clicking on the RaceBuddy button on the NASCAR.com homepage.

SPEED will offer The Speed Report at 7PM with Leigh Diffey and Rick Allen co-hosting. At 8PM it will be John Roberts with Jimmy Spencer and Kenny Wallace on Victory Lane. The night ends at 9PM with Wind Tunnel where Dave Despain's guests are Jamie Allison, the Director of Ford Motorsport and SPEED's own F-1 guru Steve Matchett.

We will live blog the Sprint Cup Series programs on TNT, please feel free to use this post for comments on any of the Sunday morning NASCAR TV programs. To add your comments, just click on the comments button below. This is a family-friendly website, please keep that in mind when posting. Thanks for stopping by.
Posted by Daly Planet Editor at 8:30 AM 7 comments: