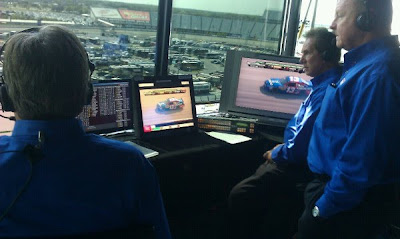 It's a strange time of the year. Twitter is moving all kinds of motorsports information as is Facebook. It's been my suggestion that all true NASCAR fans get on Twitter as soon as possible. There is little doubt that this simple and free technology is changing the motorsports communications dynamic from top to bottom.

Here are some of the items in the news today:

The NASCAR on FOX production team is gathering for their two-day annual meeting in the Charlotte, NC area. Chris Myers and Larry McReynolds both asked NASCAR fans on Twitter to offer suggestions they would then bring up at the meeting. Nice touch.

It was a NASCAR vs. IndyCar showdown at the Indy Karting Classic on Sunday. The feature event streamed online by the 3 Wide Life bunch featured go-karts racing indoors on concrete at the Canseco Fieldhouse in Indy. Click here to read the story.

Sports Business Journal just released the new "50 Most Influential" people in sports. NASCAR Chairman Brian France is at #17, up slightly from last year. No other motorsports executive is on the list. Click here to see the entire list.

Still working hard to get details on the CBS airing of the 2012 Lucas Oil Chili Bowl Nationals. The date being mentioned is January 28, but no response yet from the production group. Click here for the event website. This is a big off-season meeting for all kinds of motorsports personalities centered on racing USAC midgets on dirt inside the Oklahoma Fairgrounds exhibition building.

While in the past, NASCAR relied on the network producing the race telecast for on-track replays, it appears that things are about to change. NASCAR and a company called Telestream have just made a deal for something new.

"The instant replay system that Telestream will be providing NASCAR next season will enable our officials to perform their jobs in an even more efficient and time-sensitive manner," said Robin Pemberton in a media release. "Having instant access to that many camera angles featuring such high quality video will be a terrific addition to our race weekends."

One key point jumped out from the release. This news system gives NASCAR officials in Race Control the ability to view on-track incidents through synchronized multiple camera angle displays, including time-stamped track status metadata – in real time or on-demand. That should be a great assist with on-track incidents that in the past used the TV feed as the only source of content.

Bob Pockrass at Scene Daily reports that unofficially the Daytona 500 start time will be 1PM for next year. This has been an issue in the past. Pockrass also reminds fans this year the race is one week later than usual due to pressure from the NFL and the Super Bowl. Click here to read Bob's story.

We will be updating new links and stories all day long as this off-season Monday continues. Happy to have your comments on these topics of NASCAR TV/media questions.