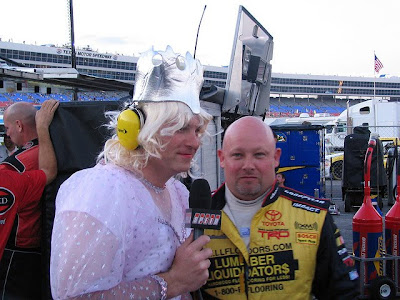 It's going to be an interesting day from the New Hampshire Motor Speedway on Friday. ESPN2 and SPEED are going to be flipping coverage back and forth depending on whether the Sprint Cup Series cars or the Camping World trucks are on the track.

The day ends with an interesting TV tripleheader of shows. Nicole Briscoe hosts NASCAR Now, then the saga of Kyle and Samantha continues on Kyle Busch: Riding Shotgun . Finally, Krista Voda returns to host Trackside with Todd Bodine as a guest. That is Todd above about to be interviewed by Glinda, the Good Witch.

There is no love lost between Bodine and Kyle Busch. Darrell Waltrip already suggested earlier this week that Bodine's live TV comments might bring a strong reaction from Busch, including his own special guest TV appearance.

The complete NASCAR TV schedule is on the left side of this page.

We will crank-up the live comments at 11AM and run throughout the day. Join us when you can to catch up on all the items from NHMS. You can also follow us on Twitter at twitter.com/thedalyplanet anytime. Thanks!
Posted by Daly Planet Editor at 9:30 PM 7 comments: 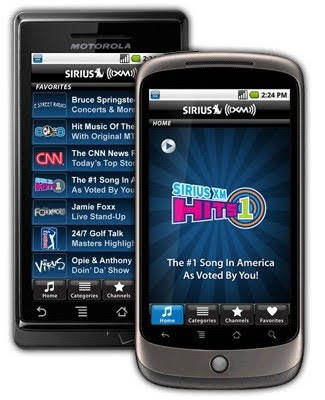 Wednesday the line-up of personalities on SiriusXM NASCAR Channel 128 was amazing. Chase drivers mixed with TV personalities, crew chiefs, owners and a host of other great guests.

As the sport heads into the Chase, this week is the big media push to get the word out about the first race in Loudon, NH. Here is just a partial list of some folks who appeared on SiriusXM Wednesday:

The picture above is of the SiriusXM online app for cell phones. There is also a program for streaming the SiriusXM signal online for desktops, laptops, iPads and other devices. What all of this wonderful technology has in common is that none of it can deliver Channel 128. NASCAR audio cannot be streamed online.

Turner Sports Interactive holds the total online rights to NASCAR in a contract that has years to run. Turner wants payment from SiriusXM before any signal, including Channel 128, is used online. Needless to say, SiriusXM just avoided bankruptcy recently with a bail-out from a top media executive. Cash is the last thing Sirius has lying around.

Once again this year, as the NASCAR season gets ready to head into the playoffs, there will be no solution to this problem. Nothing has changed.

Off Season Priority: Online Streaming Of SiriusXM Channel 128 was a TDP column in December of 2009. Click here to read the post which has references and some good reader comments. Here is the opening paragraph.

This season ESPN has proven the issues affecting the 2009 coverage are continuing despite some new faces in new places. The current ESPN production philosophy of focusing on a handful of stars for the short segments of racing between commercials just does not work in Sprint Cup Series coverage.

While Sprint has a phone app called NASCAR Sprint Cup Mobile, the program features scanner chatter on races and some online text links to SPEED and the NASCAR.com website. Sirius is the only outlet that provides fulltime weekday radio support for the sport.

Sirius, Turner and NASCAR are all representing their own interests as business folks do, but there has to come a time when those parties realize that the ship may be taking on water. Between the NFL, the economy and the wide variety of other TV and online sports options, NASCAR is just not the same product it was five years ago.

Distributing this viable and important Sirius signal through modern technology to as many fans as possible simply has to be a priority at this time. Let's hope someone with character does the right thing and breaks-up this stalemate soon.

We welcome your comments on this topic. To add your opinion, just click on the comments button below. This is a family-friendly website, please keep that in mind when posting. Thanks for taking the time to stop by The Daly Planet.
Posted by Daly Planet Editor at 4:30 AM 16 comments: