NASCAR In The Red Zone 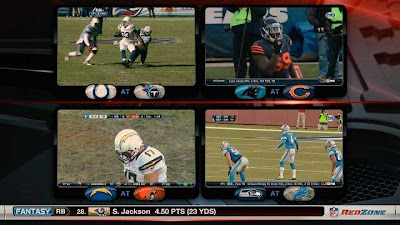 The Chase for the Championship was the response of NASCAR to the competition on Sunday afternoons with the National Football League. At the time, the focus was on trying to draw attention away from the regional NFL games with a national playoff format.

The picture above is from the NFL's response to local TV stations locking viewers into two pre-selected games in their market. The NFL Red Zone is offered on both satellite and cable TV for a small monthly fee. It runs on football Sundays throughout the early and late afternoon games.

Simply put, the folks at the Red Zone watch all the games in all the markets and swing the coverage to every key moment of every single game. At first glance it's a bit overwhelming, but then reality hits. The NFL has the ultimate remote control and you are watching them use it.

When two moments are unfolding, they simply use two video boxes. When there is a need for more, as with the picture above, they simply add another. Basically, the picture-in-picture function is controlled for the viewer. During the entire time a Sunday afternoon Sprint Cup Series Chase race is running, the Red Zone is working to keep NFL fans entertained by providing out-of-market game content.

Meanwhile, NASCAR is offering a single TV telecast with some isolated cameras and in-car feeds available online. The single channel produced for viewers is interrupted by commercials roughly one-third of the entire program time while the event is in progress. By simply paying a small fee for service, the NFL solved that problem. The Red Zone has no commercial interruptions.

In a recent TDP post titled "The Art of the Spectacle," the comparison was made between the era of the non-Chase format and today's made-for-TV NASCAR playoff. When the Chase was created, it mirrored some other pro sports like PGA Golf that also tried to create an internal playoff structure in response to the NFL season.

A short time ago, NASCAR reached a new TV deal with FOX Sports. By negotiating inside an exclusive "window" of time available only to existing TV partners, both NASCAR and FOX got what they wanted. FOX landed 13 Sprint Cup Series races filling a time in the network schedule without other pro sports. NASCAR set a solid financial foundation for the future of the tracks and the sanctioning body.

What is left dangling in the wind is the Chase. ESPN has decided not to negotiate inside the exclusive period and instead wait until 2013. That network televises the final 17 Sprint Cup Series races, including the entire Chase. The current TV contract ends after the 2014 season.

With the FOX deal now in hand, it might be a very good time to address the reality of the Chase. A time period now exists where NASCAR could again ponder the season points and championship structure. Just like when the original changes happened, the entire idea would be to better serve the sport and the fans.

In today's fickle and high-tech world, there are few TV viewers who are willing to devote over three hours to a single event. Even the regional NFL games reflect the network's awareness of this with the heavy amount of cut-ins for highlights of other games. The effort to keep the attention of the sports TV viewer has never been greater.

During the Chase races, despite the reality of a full field of cars running at speed, the perception on TV is that only twelve cars really matter. It isn't a failure on the part of the TV network showing the race, it is a function of the made-for-TV format originally created to battle pro football.

Just as the NFL has innovated with the Red Zone channel to serve viewers, NASCAR needs to innovate with the part of the Sprint Cup Series season that competes with football. Perhaps the place to start is to return the individual racing weekends to prominence. Allow the races to become the star and the season points to be allocated in whatever fashion after the Victory Lane and pit road interviews.

This puts the promotion, the hype and the rivalries back in the spotlight without the horse collar of the Chase choking-off the tension and stories built up during the season with an arbitrary cut-off for contention. It lets the simmering pot of the NASCAR year continue to heat up as all the drivers now have a chance to be a star after September.

It also dismantles the star system within the multi-car teams as the best resources and manpower can now remain intact instead of being pointed toward the Chase contender or contenders within the company. The emphasis on making all the teams relevant also returns the ability of the media corps to feature them all once again.

Finally, the fans of the drivers and teams outside of the Chase are formally handed an invitation by NASCAR to depart until next February and watch the NFL for the final ten weeks of the season. TV will not and seemingly cannot find a way to update, report or feature non-Chasers even when in contention for a race win. With 12 cars in and 30 cars out, the Chase math is not hard to follow.

2013 offers NASCAR a unique window to do some research and development. It's essentially the beginning of a two-season lame duck period of the existing TV contract. With the FOX deal now done, NASCAR knows the remaining sports TV players will come calling when the time is right. The financial risk is long gone.

What's the harm in taking the temperature of the teams, networks and fans where the Chase is concerned and making some changes? This window of opportunity will not come again and certainly ESPN would like to see higher ratings in the two remaining seasons for the final ten races. An experiment that works would yield significant benefits for everyone concerned.

One thing is for sure, the NFL will be working hard again next season to sharpen its technology and delivery of live content to fans. Maybe NASCAR can seize this opportunity to use the strength of its drivers, tracks and rivalries to bring back those fans who walked away despite the best intentions of the Chase.

We invite your opinion on this topic. Comments may be moderated prior to posting.
Posted by Daly Planet Editor at 11:21 PM 52 comments: