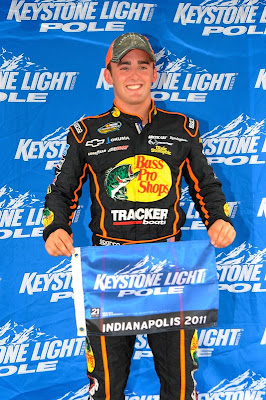 Here we go again! The Camping World Truck Series has put on the best show for TV all season long. No lovebug racing, no fuel mileage races and no whining!

Krista Voda starts the action off with the pre-race show. Ray Dunlap and Hermie Sadler are the reporters. Rick Allen, Phil Parsons and Michael Waltrip are the trio in the booth for the race.

The trucks on this short-track should be lots of fun. A good field is going to feature some regulars running up front for the series title with some ringers.

There are few bells and whistles on this track. The action is right in your face and the challenge for the director is to strike the correct balance between the high cameras for perspective on the field and the low cameras to relay the speed.

This may be the final truck series race at this track due to a variety of factors. What we do know is that this racing doubleheader weekend of Nationwide Series and trucks will not exist next years. That is certainly a shame.

This post will serve to host your comments on the SPEED coverage of the Camping World Trucks from Indy. To add your TV-related comments, just click on the comments button below. Thanks for taking the time to stop by. 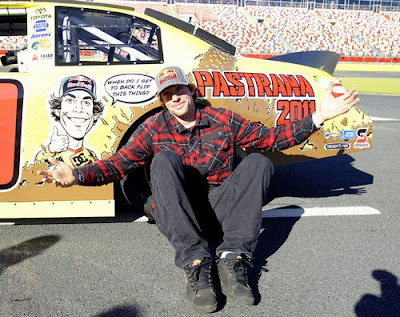 Thursday night at the X Games, Travis Pastrana fell while attempting a trick called a "720 rodeo" on a motorcycle. The worst part was as he fell, the bike fell on his right leg hard.

Pastrana got up, took one small step and then went immediately to his knees. It was his right lower leg that was injured. Originally, the on-site ESPN doctor suspected a fracture of both the tibia and fibula bones.

At 11:30PM Eastern, both ESPN and several other news sources were quoted as saying Pastrana has a right foot and ankle fracture. The ESPN Motorsports Twitter account said he would likely not race this weekend and he is definitely done for the remainder of the X Games.

As Friday unfolds, we will use this post to continue to track the Pastrana injury and the effect it has on the ESPN plans for a sophisticated effort at making Pastrana a centerpiece of the Nationwide Series coverage on Saturday.

Veteran reporter Jim Utter of the Charlotte Observer indicated that he did not see the Pastrana-Waltrip Racing entry being driven by someone other than Travis due to sponsorship issues. He suggested it would be withdrawn.

Reporte Dustin Long from Landmark Newspapers says he asked co-owner Michael Waltrip what would happen if Pastrana was injured and Waltrip said he was packing his driving suit as a back-up. Now that could be interesting. We will certainly see as the weekend unfolds.

If you have information on this topic, just click the comments button below to add it. We are keeping our frame of reference on this topic limited to the media and TV aspects of this injury and how it is going to affect the race coverage. Thanks!

ESPN And SPEED: The Unholy Alliance 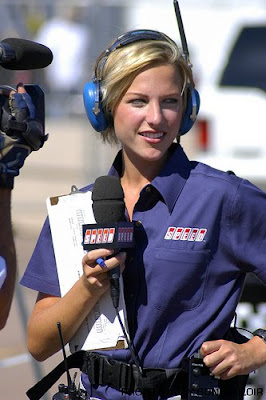 With the Sprint Cup Series TV pie cut into three pieces, fans see the races on FOX and TNT until ESPN debuts at the Brickyard 400 on July 30. Along the way, TV also has to produce and cater to the hardcore fan who wants to watch coverage of the practice sessions and qualifying.

Most of that "support" coverage is on SPEED. The network, which has no Sprint Cup Series points races, acts as a TV platform for extended coverage of the series. In addition to the practice and qualifying, SPEED also provides shows like Trackside and RaceDay that bring added attention.

Along the way, TV viewers become used to seeing on-air talent move easily back and forth between SPEED, FOX and TNT. There is a big pool of announcers and reporters needed to handle all the on and off-track programming.

There is no better example of this than Lindsay Czarniak, who is pictured above. Working the summer races for TNT, she also reported for SPEED on practice and qualifying sessions. Ironically, Czarniak has now departed both of those roles and headed to ESPN to work full time as a SportsCenter anchor.

Every year since 2007, that spirit of cooperation between NASCAR TV networks ends on this weekend. When ESPN comes to the Sprint Cup Series, an unholy TV alliance begins that lasts for the remainder of the season.

The concept is pretty easy to understand. No ESPN announcer or reporter will ever work on any SPEED coverage. As you might expect, none of the SPEED talent will appear on any of the ESPN practice and qualifying sessions.

ESPN cherishes what is called exclusivity. The upside of this is that the announcers are only seen on ESPN and can easily be identified with just that brand. The downside is that often ESPN folks have plenty of time to kill when SPEED is providing most of the support programming.

By the time the ESPN Sprint Cup Series package rolls around, fans who watch the support programming are much more familiar with names like Wendy Venturini, Matt Yocum and Bob Dillner than the ESPN pit reporters. The SPEED team has been a constant companion for the first five months of the season.

Although ESPN has also been following the NASCAR trail since February, the efforts of that network have been restricted to the Nationwide Series. Despite the fact that ESPN is enamored of the Cup drivers in those Nationwide events, none of the ESPN pit reporters have worked the Sprint Cup Series trail.

It's certainly an interesting on-air dynamic that for the rest of the season there will be two completely different groups of announcers working side-by-side at the track, nose-to-tail in the TV compound and often back-to-back on the air on the exact same NASCAR series.

There is little doubt that this disjointed effort where practice, qualifying and support shows are concerned will be addressed in the upcoming NASCAR TV contract negotiations. It's been suggested that SPEED handle all these telecasts for the sake of continuity.

In the meantime, get used to channel-hopping between ESPN and SPEED as it's that time of the year again. This weekend SPEED focuses on Friday, ESPN on Saturday and both networks are working hard on Sunday. It's going to be another interesting run down the stretch.

Posted by Daly Planet Editor at 5:00 AM 6 comments: