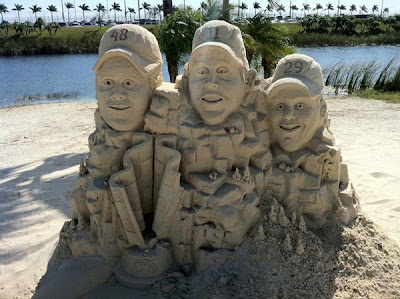 As we continue to look back at the TV issues of the 2010 season, we have been aided by a recent press release from ESPN. After some media members and NASCAR pundits blamed cable TV for the fading ratings of The Chase, ESPN has fired back.

Before we review the ESPN document, let's go back to the issue. This was the first season that the vast majority of the Chase races had been moved to ESPN. When the first TV contract was done after the Chase, there was an emphasis on the fact that the final ten races would be seen on "free over-the-air TV."

Unfortunately the reality of rain, red flags and long delays under caution made the Chase races a mess for broadcast TV. Trying to serve four timezones was almost impossible and the stories of ABC local affiliates either not carrying the pre-race show or leaving at the checkered flag for local news came in on a regular basis.

So, the subsequent shift to ESPN brought pro's and cons. The flexibility of cable TV meant a designated pre-race show, complete coverage and an extended post-race show for every Chase race. The cons were that once the NFL began the pre-race show was on ESPN2.

One other drawback frequently mentioned was that those without cable TV service would not be able to see the final ten races. Of course the Camping World trucks were on SPEED and the Nationwide Series raced on ESPN2, so those same fans would not have seen any of those races. In addition, the summer Cup races were on TNT so the same fans would have also taken the summer off.

The thrust of the argument for free TV was that the rough economy had caused many households to drop cable TV service. Some had been rumored to be "cord cutting," which became the new buzzword. That means dropping cable TV service and using the Internet for video streaming instead.

In October, ESPN had a series of meetings with NASCAR. The topic on the table was the cause for the substantially lower ratings. Certainly, the elephant in the room was the NFL and the incredible ratings success of the 1PM ET games on Sundays.

The other big topic fed by some media members was the shift from ABC to ESPN and the loss of those households that had dropped cable TV service. The new ESPN survey helps to address just what is happening with cable and Internet homes in the marketplace.

Click here to read the data released by ESPN. While not exactly spoken in plain English, what the survey says is the erosion of homes is very small.

Here are a couple of key sentences:

The study found that just 0.28 percent of homes in the Nielsen sample dropped multichannel service but kept their broadband Internet connections.The study also showed that the number of multichannel homes adding a broadband connection was nearly five times as large as the "cord cutter" group.

ESPN and ESPN2 are now over the 100 million home mark in the US. This means the penetration of these networks is almost equal to over-the-air TV distributed by local stations. Coupled with the information that few existing cable customers dropped television service, it gives ESPN a strong case that distribution was not the big issue with the Chase problems.

If we can close that door now once and for all perhaps attention can be turned to the reality of the Chase and the many problems of providing television coverage of a race within a race.

TV Problems With The Chase Easy To Understand was a column focusing on the issues faced by ESPN as they navigate through the tangled web of racing scenarios. Click on the title to read the column and the comments.

Those Footsteps Might Sound Familiar was originally published in August as a preview of the trouble that the NFL might bring to NASCAR yet again. Click on the title to read the column.

On January 21, Brian France will be speaking to the media during a test at the Daytona International Speedway. After the TV struggles of NASCAR's top series down the stretch, France will be announcing his decision on what changes will be made for 2011.

With NFL football continuing to dominate the ratings and ESPN proving there is no distribution problem, the focus is going to be on the sanctioning body to deal with two issues. The Chase format and poorly produced TV coverage are now the remaining cards on the table.