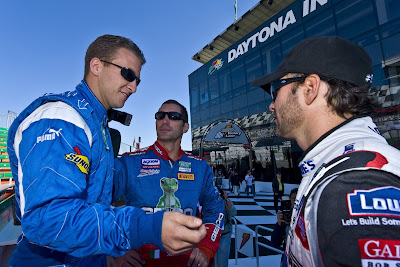 A visit to the Rolex 24 at Daytona is always fun. The mix of fans on-hand includes a large contingent of NASCAR folks who are there camping for a weekend of racing. The Jimmie Johnson and Juan Pablo Montoya t-shirts mix with the Porsche and Ferrari jackets over both cocktails and breakfast.

While Johnson may have been the headliner, it was Montoya who stole the show on SPEED this Sunday as he drove the final stint in the Ganassi Racing Daytona Prototype.

SPEED mounted an impressive effort and play-by-play announcer Leigh Diffey certainly can get excited on the air even after an exhausting 23 hours. The final hour of racing was a focused and fascinating effort as the face of Daytona clearly changed to the DP formula.

Meanwhile, after a Friday night rain-out it was Mike Joy and Phil Parsons calling the racing action from Irwindale, CA on Saturday. The Toyota All-Star Shootout is a one-time look for many fans at the regional NASCAR racers. This field was spiked with Ron Hornaday Jr. and Joey Logano. Both would play huge roles in the event.

Joy and Parsons picked right up where they both left off in 2008. Smooth and efficient, these two professionals blended well and "let them race." The large amount of cars and the frequency of the cautions did not rattle the TV crew, who calmly had things well in hand.

Unfortunately, Hornaday tried and failed at a spectacular move and it caused a large accident. It eliminated several top cars, but SPEED was quick to reset the situation and get things organized again for the viewers.

There was a "mall cop" sighting and interview, but it turned out to be under the yellow flag and was painless.

Click here for the clip that is going to live on YouTube for a very long time. Joy called it as Logano made a bold move going for broke on the final corner. The excitement of racing was back, even if the outcome of Logano's move was less than successful.

In much the same way that Joy and Darrell Waltrip were the right on-air duo to handle the Michael McDowell qualifying wreck in Texas, Joy and Parsons were right for the aftermath of the big Logano mess. Calm and cool, the two let the actions on the track speak for themselves and never took sides. It was a long night and a nice start to the TV season for both men.

Meanwhile, the SPEED Grand-Am team was having a blast watching Montoya. David Hobbs has always lent the right amount of irreverent commentary to any sports car broadcast and this was no exception. His comments about the four car battle in the final hour were just what tired race fans needed.

The new later afternoon end time worked well and let TV viewers see a lot more daytime racing. Perhaps, we will see some additional cars in the field for next year to return the total car count back to the old glory days of the Rolex 24.

Montoya ultimately finished in second place and then provided a solid post-race interview where he talked about his on-track battles and praised the Ganassi team. It should be an interesting transition for him to get in a big COT car and return to the Daytona oval in a couple of weeks.

This was a nice doubleheader weekend on SPEED with something for everyone. The SPEED Report did a nice job Sunday night of recapping both these events and the other series whose season is underway. This program seems to have the potential to be ninety minutes in length once the NASCAR season begins, but that might be a tough sell in these economic times.

If you watched these events, please let us know what you thought of the TV coverage by clicking on the COMMENTS button below and adding your opinion to The Daly Planet. The rules for posting are located on the right side of the main page. Thanks for taking the time to stop by.

The photo is courtesy of Grand-Am Racing/Brian Cleary. Click on it to see it full-size.
Posted by Daly Planet Editor at 10:00 PM 41 comments: