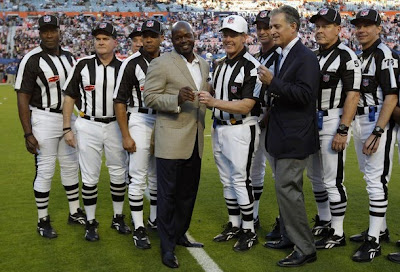 Update: The Chase for the Championship was designed with several things in mind. One key element was to create additional excitement during the overlap of NASCAR and the NFL. Once again this year, the final September through November slate of races on TV were topped by regional NFL games in the ratings.

The column below was originally published on August 12, 2010:

It was only the first Sunday exhibition game of the season. The NFL Hall of Fame game is a casual affair featuring sideline interviews with the new members of the Hall. While the play was sloppy and the score didn't count, the TV results were nothing short of spectacular.

"NBC’s Sunday Night Football coverage of the NFL’s preseason opener between the Dallas Cowboys and Cincinnati Bengals was the most watched preseason telecast in nine years and the most watched Hall of Fame game in 11 years," said the SportsVideo.org website.

"The Cowboys’ 16-7 victory attracted 11.4 million viewers and logged a final rating of 6.8, up 39% in ratings and 44% in viewership from the Buffalo Bills-Tennessee Titans outing last year. The Hall of Fame Game more than doubled ESPN’s 2.7 rating for its Sunday Night Baseball coverage of the New York Yankees and Boston Red Sox."

Meanwhile, NASCAR was at Watkins Glen Sunday afternoon and drew a 3.2 U.S. rating and 4.932 million viewers on ESPN. The Sprint Cup Series has been racing since February and is in the heart of the season right before the playoffs.

We are now officially one month away from the first Sunday of regular season NFL football on September 12. Last season, the NFL simply crushed NASCAR. ESPN's struggles combined with the lack of a compelling Chase storyline motivated many sports fans to change the channel on Sunday afternoons and watch their local NFL team in action.

This year, things are a bit different. ESPN has made changes to the coverage that are working and the energy of the telecasts is much better. Marty Reid had partnered with Allen Bestwick putting two top television professionals front and center to lead the series to Homestead.

"TV Troubles With The Chase Easy To Understand" was a TDP column from October of 2009. Click the title to read the entire post and the attached fan comments.

While the various TV networks providing NFL coverage on Sunday afternoons were watching teams simply trying to win games, the NASCAR on ESPN crew was involved in something very different. Three distinct storylines were playing out within the same telecast. This confusing scenario began with something called "The Chase."

These were our words last season:

The focused coverage and media hype on the Chase drivers forces fans of non-Chasers to abandon their NASCAR TV viewing and wait once again for the Daytona 500. The fundamental problem with the Chase is there are more drivers outside of it than in it.

Last season this resulted in a scenario that drove ESPN into a frenzy and viewers away from the TV screen. This from TDP last November:

Last year, the "Chase points right now" graphic and ESPN's man crush on all things Jimmie Johnson were brutal. The network chose to focus on the Chase and the approach fundamentally failed. It's fair to say that few teams outside the Chase were featured unless their car was in the top five on the track.

ESPN's Nationwide Series coverage last Saturday at the Glen was outstanding. The network chose to present the telecast simply as a race. The best battles on the track were featured, cars out of the race were updated and the announcers were open and honest with analysis of what was happening. Results and points were sorted out after the event was over.

NASCAR and ESPN need do nothing more than glance over at the NFL for motivation. Unless a new and fresh approach to covering the Sprint Cup Series down the stretch is put in place, the results are going to be the same. It should be very interesting to see how Reid, Bestwick and the NASCAR on ESPN production team take yet another shot at keeping fans in front of the TV when the NFL comes calling.