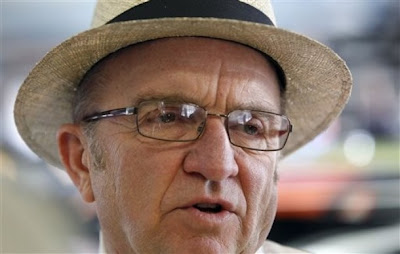 There certainly have been some interesting agendas revealed this week in Daytona. From Danica Patrick's masterful manipulation of the media to seven hours of media day being webcast on NASCAR.com, it has been fun to watch.

The Trackside program on SPEED was the source of the most recent TDP column. The first show of the season aired at 7PM Friday night and featured guests Jack Roush and Brad Keselowski. The show is hosted by Steve Byrnes and the panelists are Darrell Waltrip, Larry McReynolds and Jeff Hammond.

Roush was seated next to Waltrip on the set and he spoke about various topics including his teams, his goals for this season and his personal history in the sport. Then, Waltrip brought up a topic that once again generated some controversy.

Click here for the TDP story relating the comments about the NASCAR TV partners made by Roush on the January media tour in the Charlotte, NC area. The Roush comments were so off-the-wall that several of the TV networks felt compelled to respond immediately.

"You know Jack," said Waltrip. "I reluctantly bring this subject up but I would not be doing my job if I didn't. I read where you felt that maybe the media had been a little biased or hadn't been fair or maybe too critical. What were you thinking?"

"The thing that was on my mind is I don't watch a lot of baseball," said Roush. "But I watch the playoffs for basketball, hockey...when it comes down to our final ten races I watch that in all the series if I can...and it came to my attention and I spoke to that...I thought the people who announce the other sports were more supportive of the sanctioning bodies and of the sport(s) itself than some of us (in the NASCAR media) have been."

Roush then looked directly at Waltrip and continued:

"And I'll say than you have been some days," Roush commented. "That's not saying that you don't have heart for what you doing and everybody at the table and everybody else that picks up a microphone does not have passion for what they do."

"But, we need to make the most we can of the exciting dimensions of the things we have going on and not look at the things that would be negative that would be possibly not absolutely agreed upon by everybody."

Darrell Waltrip then emphasized to Roush that everyone involved on the media side loves the sport, has their own opinions and sees things differently. Waltrip reminded Roush the each owner also has their own agenda and the media has to sort through those issues.

Roush then brought up another item from his original interview:

"And we all have our own prejudices." he said. "We've had fights and the ones that we didn't finish the way we wanted to, so sometimes we like to fight when we shouldn't."

Roush was speaking to the point that he made in the NASCAR.com column where he stated that some TV announcers are still grinding personal axes left over from their driving days. Roush specifically called-out Rusty Wallace and Waltrip.

The Roush belief that somehow TV commentators shrouded the sport in a dark cloud is laughable. On the other hand, the longtime problem that we have discussed many times is that personalities like Wallace, Waltrip, Brad Daugherty and even Phil Parsons have ongoing direct business dealings inside the very sport on which they comment.

Where do you come down on the recent Roush comments? Is ESPN a network that speaks to the reality of NASCAR while SPEED shows like Trackside, Raceday and Victory Lane are all about public relations? Is Roush delivering a NASCAR message to the TV partners to watch their step this season?

The theories have been flying in the TDP email about why one owner suddenly is advancing this theory that "TV negativity" is to blame for the issues of last season's declining attendance and TV ratings. While you earlier read the response from the TV networks, it may be the silence from NASCAR itself on this topic that may be speaking the loudest.

To add your comment on this topic, just click the comments button below. There is nothing to join and we do not want your email. We just want your opinion!

TDP is a family-friendly website, please keep that in mind when posting. Thanks for taking the time to stop by. We have a full slate of updates, news and live blogs scheduled for Saturday. Please join us for the ARCA race and Bud Shoot Out.
Posted by Daly Planet Editor at 9:00 PM 42 comments:

SPEED's "Trackside" Back For Better Or Worse 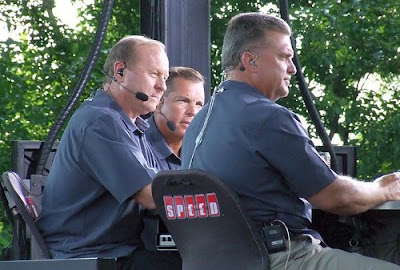 Some love it and some hate it. Those who love it enjoy the vibe from the live crowd, the enthusiasm of the panelists and the variety of guests. Those who hate it detest the noise from the crowd, the "over the top" announcers and the politically correct drivers.

Whatever the opinion, SPEED has returned Trackside for another full season of one-hour programs on Sprint Cup Series weekends. The first is Friday at 7PM ET. Steve Byrnes hosts the series with Jeff Hammond and Larry McReynolds as regular panelists. Darrell Waltrip sits in for the Fox Sports portion of the schedule and then gives way to Elliott Sadler for the rest of the season.

Trackside comes from the SPEED Stage and deals with a wide variety of outside elements. The show has originated in freezing cold weather and been done in the rain with the panelists holding umbrellas. Sometimes recorded and sometimes done live, this show normally follows a set format.

There are two NASCAR guests, most often associated with the Sprint Cup Series. It's hard for the show to get the Camping World Truck Series guys because of scheduling. While some Nationwide Series regulars appear, many of the Cup guys on the show also run in the Saturday series.

Each guest has an extended interview of several segments, normally about twenty minutes long. This follows the opening segment where the panelists talk about the NASCAR news and happenings from the weekend. This group is very comfortable with each other and it shows.

The struggles of Trackside have been with the audience, the size of the panel and the focus of the conversation. The crowd around the SPEED Stage on Friday nights can get a little loud. When they become empowered as a group, they often take the opportunity to chant driver names or sometimes more colorful sayings while the show is in progress.

What often seems to be an issue is that the crowd cannot hear the conversations of the panelists and guests. Fans constantly email as to why the panelists have their backs to the crowd. The logistics of the stage really mandate where the TV equipment has to be put. In this case, the panel sits in front of the crowd.

SPEED has used a swooping manually operated jib camera to shoot endless "bumper" shots of the fans over the years. Not once has this move been slowed down enough to allow TV viewers to read some of the homemade signs brought by the fans to the show.

Perhaps, in this year of change, SPEED might consider letting some of the signs from fans showing their hometowns or favorite drivers actually be put on the telecast so they can be made to feel a part of the show. Maybe finding who came the furthest to the race or who has the best homemade sign might even be a fun feature.

Once the second guest joins Trackside, there are a lot of voices on the stage. One host, three panelists and two guests. Six is a big number for a TV panel. Byrnes manages the program well, but often follow-up questions and lines of discussion have to end either for commercial break or to let another panelist ask a question.

In answer to this situation, Trackside has tried several different ways of allowing one panelist to focus on one guest. Who knows what this season will bring, but there often seems to be a lot of relevant content left on the table when guest interviews are over.

SPEED is on Twitter, but there have been no plans announced to allow fans to suggest questions or topics for the Trackside guests. We will update things if that changes. There is a lower level of interaction that is possible on a tape delayed program, but fans are clamoring for involvement and the TV networks have to respond.

Do you watch Trackside? What is your opinion on the topics discussed above? If you have suggestions for this series, please feel free to offer them. To add your opinion, just click on the comments button below.

We are a family-friendly website, so please keep that in mind when posting. Thank you for taking the time to stop by The Daly Planet.
Posted by Daly Planet Editor at 7:00 AM 35 comments: