Anybody Watching "NASCAR Smarts" On SPEED? 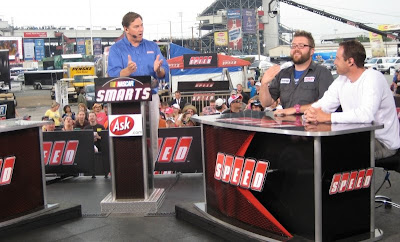 Since we have a moment, let's talk about something that pops-up in the mailbox on a weekly basis. Usually, right after the show airs. NASCAR fans are often left asking...what the heck was that?

It's time to talk about NASCAR Smarts on SPEED. Host John Roberts calls it a show designed to "test your NASCAR knowledge." The thirty minute program is taped on the SPEED Stage at the Sprint Cup racing weekends. It has a live audience that seems to be mostly concerned with getting themselves and their homemade signs on-camera.

Kyle Petty was a big hit on SPEED when he took over the regular panelist role on the Tradin' Paint TV series from Michael Waltrip. Right from the start, Petty waged war on the NASCAR journalists and had some memorable verbal brawls with the likes of Jenna Fryer, Bob Pockrass and Mike Mulhern.

In 2009, SPEED cancelled Tradin' Paint and Petty changed from an opinionated and impassioned defender of the sport into a grinning game show contestant. Gone from the scene was his powerful personality and strong opinions. Instead, Petty and Rutledge Wood laugh and joke their way through this meaningless program.

Wood sits across the stage from Petty and each of them are paired with another contestant to form a team. The rules, which change frequently, have Roberts offering questions to both teams about NASCAR trivia. In the first few months, almost no one got any questions right and the format was quickly changed. Now there are true and false, multiple guess and even video questions to "help" the show along.

On this day from MIS, Roberts introduced yet another new wrinkle. Instead of fans, Petty and Wood would be joined by two "NASCAR type guys." Elton Sawyer is a well-known name in the sport and is currently the Competition Director at Red Bull Racing. Keith Barnwell is also a NASCAR veteran who is currently working as a spotter in the Cup Series. Both were labeled as "NASCAR Fanatics" on the program's graphics.

As usual, the questions being asked were inserted on the screen and the graphics contained a huge Ask.com logo. That is not by coincidence. The content of the Ask.com questions centered around MIS and the various events, owners and happenings at the speedway over the years.

All four panelists took their cues from the smiling Mr. Roberts and stared at the TV monitors on the stage to read the questions and see the video footage. In the final segment, Wood and Petty then get to wager any or all of their points on a supposed fan question voted on at SPEEDTV.com. Here is the actual question from the MIS show:

In your opinion, did NASCAR's new double-file restart "shootout style" rule at Pocono:

Amazingly, Team Rutledge picked A. Amazingly, they were right. As Roberts tallied their points, Team Kyle changed their answer from D to A and were disqualified amid hilarious laughter from all concerned. End of show.

There is a distinct possibility that the laughter did not extend to the TV viewers. The fact that SPEED is trying to keep this program afloat all season long is bad enough. Add-in the fact that it replaced the only opinion-oriented show that featured NASCAR journalists and media types and that makes it a double-whammy.

So, let's talk about NASCAR Smarts on SPEED. Do you watch it or record it? Do you think it has a place on TV or is just an Ask.com infomercial? Does this show affect how you regard Petty or Wood? Do you miss Tradin' Paint or had that program run its course? Please feel free to add-in any other opinions on this topic.

TDP welcomes comments from readers. Just click on the comments button below to add your opinion. This is a family-friendly website, please keep that in mind when posting. Thanks for taking the time to stop by and leave your comments.
Posted by Daly Planet Editor at 8:00 AM 44 comments: