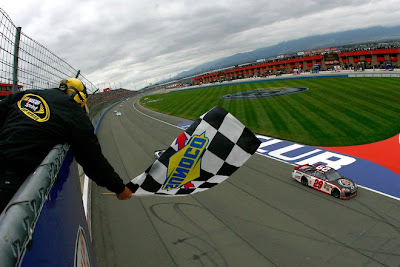 It's been a hot button topic since this blog began in 2007. Folks like me who believe that watching the lead lap cars run to the finish on TV is crucial vs. folks who think the winner deserves the TV coverage. This season, NASCAR on FOX has essentially chosen to show only the leader finish the Sprint Cup Series races.

Click here to read Kyle Petty Gets No Respect From FOX Sports. This is an excerpt from that TDP column in May of 2007:

"Sunday, just days short of his 47th birthday, Kyle Petty finished third in the Coca-Cola 600, one of the biggest races of the year. Other than the people in the stands and on pit road, no one saw him finish. Fox Sports got caught up in the excitement of Casey Mears' first Cup win and then got lost. What may become Petty's last moment in the sunshine was ruined by this strange focus on the winner. Once again, no other cars were shown finishing the race...including Kyle in third."

The ultimate irony of that moment is that Kyle was driving the Coke Zero car in the Coke 600 and was stepping out of the sport to work in TV after the race. Instead of showing Kyle and the other lead lap drivers finishing, FOX chose to capture the "drama" of Mears, his pit crew and the folks on top of his pit box.

The NASCAR TV partners have a choice. As a production philosophy, the networks can either stand back and let the live action be the star or use the television tools available to them and insert their own agenda. Attempts to do just that including Digger, the Draft Tracker and even Brent Musburger as "the host" have all backfired.

My feeling is that showing only the winner of the race cross the finish line, for whatever reason, is fundamentally unfair to the fans of the other teams on the lead lap. Two good examples from Sunday are Ryan Newman finishing fifth and both Red Bull cars finishing in the top ten. Great stories, but never shown finishing the race.

SPEED regularly televises practice and qualifying sessions for the Sprint Cup Series. Often, the very same on-air personalities we see on the NASCAR on FOX telecasts are involved. The productions treat all teams with respect, chase down stories as they happen and simply work to keep fans informed.

On Sundays, all that changes. NASCAR on FOX is a personality-driven production and Darrell Waltrip is the focus. While there has been a lot of colorful personalities in the NASCAR TV booth, there have only been a handful of producers and directors who have regularly worked Sprint Cup Series races.

At FOX, Barry Landis produces the races and Artie Kempner directs. This team has been together for many years. The decision of whether to focus the attention of the television coverage on the winner or show all the lead lap cars on TV is made by these two men.

Over the last four seasons, FOX has gone back and forth between trying to create "drama" at the finish or showing all the lead lap cars. Many times after only showing the winner, FOX has been forced to actually replay the finish so fans could see the side-by-side races to the line for final positions.

This issue came to a head at the Bristol Motor Speedway several years ago. The FOX team showed only the winner finish the race on a track where laps take less than twenty seconds. In a snarling pack for second were names like Montoya, Earnhardt and Martin. Once again, FOX had to resort to replay to show TV viewers what they had missed.

The second half of Kempner's year is taken up by directing NFL football for FOX. His telecasts feature the same type of coverage. Lots of tight shots, quick cuts and always an attempt at building drama. The winning pass, the key tackle and or the great run back all end with a blur of tightly-shot images of faces and emotion.

As we have often said, FOX paid the money and can produce the NASCAR telecasts as it pleases. However, in a time of lower ratings, less sponsor exposure and a big push to promote the personalities within the sport it might just be time to step back a bit and save the drama for the gridiron.

How do you feel about this topic? Let us know by clicking on the comments button below. You can remain anonymous, but comments are moderated for content. This is a family-friendly website, please keep that in mind when posting. Thank you for taking the time to stop by.