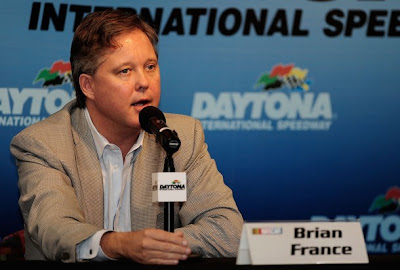 After a rough couple of seasons, NASCAR is ready to begin 2010 with some major changes in place. Historically, NASCAR has been one of the least interactive sanctioning bodies. Fans trying to contact the organization were actually given a post office box address in Daytona Beach, FL. Click here to see the page.

Thanks to the efforts of several key staff members, that dynamic has changed rather drastically over the last two years. Now, NASCAR has every series on Twitter along with most of the tracks, teams and sponsors. Information now flows much easier to the media and fans are better connected to the sport.

One hot topic has been the NASCAR Fan Council. Originally a pretty low-key group, they were pushed into the spotlight when France pointed out that the 2010 changes were largely due to their feedback.

Surveys are emailed regularly to the twelve thousand fans chosen to participate and the responses are then sorted by a marketing organization for content. Topics have ranged from Digger to doublefile restarts "shootout style." The questions have been remarkably frank and honest in addressing topics that NASCAR would never have confronted or even admitted in the past.

Fan Council members got an end of season letter from France recently, here is a portion:

Today I want to discuss two exciting improvements you might be aware of that will positively impact the entire 2010 season. Importantly, feedback from fans like you helped make these improvements possible!

First, we recently announced that NASCAR Sprint Cup Series races will adhere to more consistent and earlier start times beginning next season. Being able to anticipate when races begin will help both fans in attendance and those watching at home better plan their weekends without missing a minute of racing.

We will be returning to our roots by beginning many races earlier in the day. Next season, twenty races will be moved to 1 pm ET, including the Daytona 500, and most Saturday night races will now begin at 7:30 pm ET. For daytime events taking place on the West coast, a standard start time of 3 pm ET will be established. In addition to being more convenient for the fans viewing at home, I believe these earlier start times will greatly help fans attending the races to get on the way home sooner in the evening. Earlier start times will also eliminate the need for an extra day of travel for many of our fans.

Secondly, Double-File Restarts will be in effect throughout the entire 2010 season in all three national series (NASCAR Sprint Cup Series, NASCAR Nationwide Series, and NASCAR Camping World Truck Series). This improvement was introduced at the Pocono Raceway event in June of 2009, placing the leaders in the front of the field, double-file, with lapped cars placed at the rear.

These improvements were all made after consulting with NASCAR Fan Council members like you. We look forward to hearing more of your thoughts and opinions in the future, so that we can work together to make NASCAR the best it can be. As we head into 2010, NASCAR will continue to focus on what's most important - delivering the best possible racing to the fans.

That is a remarkable step forward for an organization that has been less than democratic for a very long time. Perhaps, the 2007 start time changes made for the TV partners taught NASCAR a valuable lesson about what group really needs to be the priority in future decision making.

Hopefully, the information gathered from the NASCAR Fan Council members during the 2010 season will be shared in a more timely and public fashion. A frequent reminder than fans are actively involved in helping to shape future policy can only bring positive results.

TDP welcomes your opinion on this topic. To add your comment, just click on the comments button below. This is a family-friendly website, please keep that in mind when posting. Thanks for taking the time to stop by.
Posted by Daly Planet Editor at 9:00 AM 15 comments: