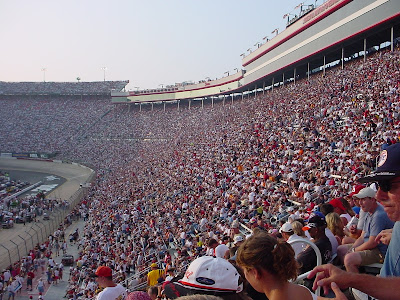 Look, there they are. NASCAR fans filling Bristol Motor Speedway back in the good old days. Fans knew the product they were getting. TV and radio spread that message and the mainstream media pounded every single accident into our heads once the race was done. Some of the incidents actually became legendary.

Well, times have changed. Wins are nice, but Sprint Cup Series drivers now race to get in the Chase. The cars are different, many tracks have been resurfaced and the new breed of driver spends more time tweeting than fighting. Fans know the sport has changed.

Unfortunately, that message has not been received by NASCAR's TV partners. There is no better example of that than the NASCAR on FOX pre-race show. The Waltrip brothers have been off-balance this season and Richmond may have been the straw that broke the camel's back.

Darrell bemoaned the fact that fans were upset because of the lack of wrecks and caution flags. He promised that the "Action Track" would deliver the goods. Michael continued his gushing promotion of the sport and everyone in it. Tonight would be different they said. It was not.

When the carnival comes to town you may be talked into buying a ticket to see the freak show on the midway. More often than not, you have been tricked. After dusty exhibits and perhaps some laughs, you walk out the backdoor knowing you have been had.

This season, FOX has continually promised one thing and delivered another. Since 99% of the fan base watches the sport on TV, this bait and switch approach has resulted in a backlash. Fans are using social media to point out that what they are being sold and what they are seeing do not match.

In response, these last few weeks have seen Darrell Waltrip say fans don't know what they want. He lamented the Bristol Motor Speedway changes without ever taking responsibility for FOX promoting the exact opposite of what the repaved track was made to deliver. That is side-by-side racing.

Instead, Waltrip pointed the finger at the fans. He called out the NASCAR Fan Council and even social media as being problems in the sport. That would be the exact same social media that Waltrip has taken to like a fish to water. His use of Twitter reflects the problem all too well.

The desperation of being stuck between what FOX is promising and what NASCAR is delivering is reflected in Waltrip's recent tweet to driver Jimmie Johnson. "Some of the best driving, racing I've seen in years, just wish fans appreciated the skill you guys have to make it happen!"

You know why fans can't appreciate the skill and the racing? Because they can't see it and can't hear it. Between the inability of the FOX director to show the actual racing and the inability of the Waltrip brothers to stop talking there is a product being produced that does not even fundamentally follow the race.

In response to the fan backlash, "crashing" is the new media term being thrown around. Now when fans speak about the difference between what FOX is promising and NASCAR is delivering it's a "crashing" issue. Those bad fans who just watch for the "crashing" are to blame. Meanwhile, the fact that FOX continually uses accidents and not racing to promote the sport is overlooked.

This season, a new TV twist is to try and show the in-car camera views of drivers involved in accidents. The FOX production team loved that technology let them see Danica hit the wall hard and Jimmie Johnson get t-boned by a car at speed. Nothing like seeing the driver's body get flung around to make good NASCAR TV apparently.

FOX viewers may not see the debris that brought out the caution, the key pass for the lead or the best racing on the track but by God they are going to see Johnson get crunched over and over again.

This weekend in Talladega, the current pattern has the potential to repeat itself. Michael Waltrip is driving in the race, but will still be part of the FOX broadcast from start to finish. This may be the ultimate MWR promotional tool. Darrell is in the Hollywood Hotel and will then call the race, no doubt with another promise of "more action" despite the reality of the season to date.

Race cars at high speed do not need to crash to entertain. If FOX promotes "the big one" this weekend at Talladega it will have learned nothing from Richmond. Perhaps, after all the talking that has gone on this week, just letting the racing on the track be the center of attention might be the best idea.

We welcome your comments on this topic. To add your opinion, just click on the comments button below. Thank you for taking the time to stop by The Daly Planet.
Posted by Daly Planet Editor at 5:00 AM 77 comments: