Formula One "Skunkworks" In NASCAR Country? 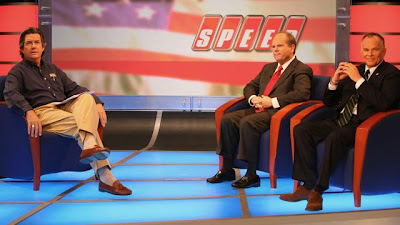 The interesting saga of an American-based Formula One team played out on Tuesday with the formal announcement carried live on SPEED. The network is clearly caught-up in the fact that Peter Windsor, longtime SPEED F-1 analyst, will be a team principal.

Windsor is a bit hazy on the details but insists that by using the available motorsports personnel, facilities and infrastructure of the Concord and Mooresville, NC areas he can put togther a "super saver" of an F-1 team.

The role of SPEED in all of this is just a little bit strange. While the network does not have a financial stake in the project, there has been an incredible amount of time and effort invested to carry this announcement live and distribute media releases about the project.

It almost seems that Windsor and his partner Ken Anderson, pictured above with press conference host Bob Varsha, have hired SPEED as their public relations company. The flip side of the coin of course is that SPEED is the home of Formula One in the US and the network attraction to this open-wheel sport runs very deep.

Windsor made some good points in his TV appearance. Many Formula One parts and pieces are already created in the Mooresville area by the numerous specialty shops for motorsports. Shaker rigs and wind tunnels do not care what kind of car is in them, they just yield data when asked.

In terms of logisitics, Windsor essentially said he was going to use FedEx or UPS for shipping and his F-1 team would always be traveling very light. In the days of the Lockheed-Martin "skunkworks," the best minds worked on new projects with minimum assistance and still came up with some wonderful machines.

Windsor's idea is to keep that concept alive by using the manpower and materials available after the recent NASCAR contraction. There are certainly plenty of engineers and team shops available around the area, but once again Windsor offered no specifics.

There was no driver named and the financial partner or partners were also not disclosed. This leads to some speculation about the reality of this effort to begin racing in 2010. If Windsor had been alongside a high profile investor, it may have made for better TV. Instead, the on-camera personalities appeared to be just generally discussing this concept as if things were still very early in the planning stages.

One thing Windsor did make clear is the impact of both SPEED and TV in general on his team. Following the NASCAR model, Windsor is planning to make his shop fan-friendly with tours and open access areas for easy viewing of team activities. There will also be a TV studio in the facility. The NASCAR model is apparently a strong influence for Windsor who will certainly find himself surrounded by examples of both racing success and failure once he relocates to Charlotte.

If you watched this press conference live on SPEED or would like to add your comments about this American Formula One team concept, please feel free to do so below. Just click the comments button.

This is a family-friendly website, so profanity and hateful speech will cause your comment to be deleted. Thanks again and happy posting.
Posted by Daly Planet Editor at 6:21 PM 18 comments: