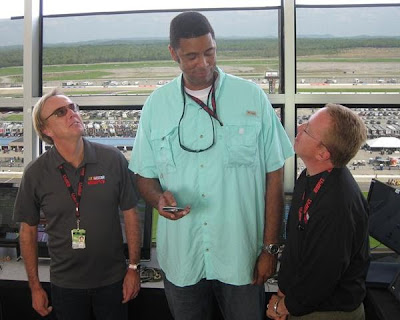 When things get weird at Daytona, they get really weird. The height of the weirdness was Juan Montoya hitting a jet dryer on the track and igniting a fire that blazed spectacularly on TV. After it was extinguished, it took track workers over two hours to clean up the mess.

Meanwhile, right in the middle of hosting TDP's live stream on Twitter, I happened to see a picture link pop-up. It was a picture from Brad Keselowski. It was a view from the backstretch. As he had done during practice and Speedweeks, Keselowski had kept his cell phone in his car. He was now tweeting with fans during the red flag.

The NASCAR on FOX team was completely out of things to talk about and dispatched reporter Matt Yocum to the backstretch. After some race talk, the topic of discussion turned to social media and specifically, Twitter.

Keselowski continued to snap pictures of the other drivers, the fire scene and even the TV folks. He continued to chat with fans, post his pictures and tell Yocum about his Twitter activities. Suddenly, social media and NASCAR were front and center on a broadcast TV network in primetime.

"NASCAR Leading Social Media Revolution" was a TDP column from last week. We spoke about the sport's transition from completely shutting out direct contact with fans to embracing the fact that social media is going to play a key role in setting NASCAR's future course. Click on the title to read the column.

As various FOX announcers spoke about their own Twitter accounts and how much fun it was to interact with fans, a funny thing started to happen. Keselowski's follower numbers on Twitter began to rise. At first it was hundreds, then thousands and then tens of thousands of people going to Twitter to see what Keselowski was sending.

By the end of the night, his Twitter account had grown by some 200 thousand people. In addition, other NASCAR-related Twitter users found their follower numbers going up quickly. TV had once again accidentally served as a platform for social media growth. All it took was an accident, fire and red flag.

"How Twitter Took Over NASCAR" was a subsequent post on the popular Jalopnik.com website. Detailed in the story is the unusual synergy between race fans and the drivers and teams on Twitter. Instead of following the stereotype, NASCAR fans are proving to be sophisticated users of social media. Click on the title to read the story.

While the issue of Keselowski having a "recording device" in his car was raised after the race, NASCAR VP of Operations Steve O'Donnell waved that possibility off and praised Keselowski for his fan interaction and outreach. O'Donnell passed along that information on his Twitter account.

Tuesday afternoon ESPN analyst Brad Daugherty appeared with host Allen Bestwick on the NASCAR Now program on ESPN2. Daugherty is one of a host of analysts and reporters that rotate through as "experts" on the TV series. The talk of this day was Keselowski and his foray into tweeting during the red flag.

Here are Daugherty's comments in full:

Bestwick: "Do you fine or not fine Brad K (for having a recording device and using it during the race)?"

Daugherty: "You definitely fine Brad K, I have had it with the social media stuff. This is ridiculous. You are in the race car. You are a professional race car driver. I don't know why you would have your cell phone with you in the first place other than to just take advantage of an opportunity to do something like this."

"There is no place for this in professional sports when you are the athlete. His focus is to be in that race car 100% focused on trying to win the race. This social media stuff, especially something like this, I just think it is inappropriate and there is no room for that."

I sent Daugherty's comments along on Twitter and the responses were varied. While many thought he was just not informed on the subject, others suggested that his background as an NBA athlete, not as a driver, was to blame for his views.

While Daugherty has the absolute right to his opinion, Keselowski's Twitter exploits were sent all over the Internet in stories on all types of websites. The Daytona weirdness may have finally pushed the mainstream door to social media acceptance wide open.

We have been active on Twitter for several years, recently moved our live race TV chat to that service and found it to be a vital link for NASCAR fans. We welcome your comments on Keselowski, NASCAR and social media.

To add your opinion, just click the comments button below. Thank you for taking the time to stop by The Daly Planet.