NASCAR Gets A Friend At ESPN 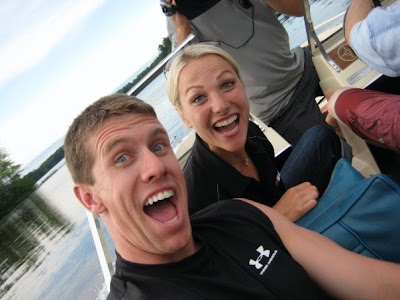 It's perhaps one of the worst-kept secrets at ESPN. The vast majority of the SportsCenter anchors hate NASCAR. They cannot stand the sport invading the time reserved for endless baseball highlights and news about important topics like another Brett Favre comeback or what Danica was wearing at the ESPY's.

When it comes to NASCAR again this year, SportsCenter has swung and missed. As they say in ESPN lingo, it was "a whiff." Click here to review a story originally posted in June about an incident that had fans fuming. This time, it was SportsCenter anchor John Anderson. His on-air antics after the Chicagoland Nationwide Series race were nothing short of spiteful.

Wednesday night on NBC4 in Washington, DC there was emotion on the set. Click here to see the send-off by the anchor team for sports reporter Lindsay Czarniak. Goodbyes in TV are usually awkward, but this one was clearly from the heart.

Czarniak was first seen by many NASCAR fans as the high-energy pit reporter who showed up for the summer during the six TNT races. Hardcore fans who watched practice and qualifying coverage know that during the TNT stretch Czarniak stepped right in and worked the garage and pits for SPEED like a veteran NASCAR reporter.

This season on TNT Czarniak has been hosting the pre-race show, remaining in the host position during the race and then handling both the TV and online post-race shows. It's been an impressive performance for someone who does not work the NASCAR trail full time.

The photo above of Czarniak and Carl Edwards is from a feature she was shooting for TNT. In her summers in the sport, Czarniak has experienced NASCAR from a wonderful perspective. She has met and interacted with the top drivers and personalities. She has been on pit road during races.

Ironically, it was Carl Edwards who showed-up live on a TNT telecast after falling out of a recent race. Czarniak was completely comfortable with Edwards just hanging around and offering commentary. Comfortable on the air is a phrase that is often used to describe Czarniak's style.

When August rolls around and ESPN is handling coverage of both the Nationwide and Sprint Cup Series, Czarniak should just be getting her feet wet on the air in Bristol. That certainly is interesting timing.

Don't underestimate the impact of a high-profile ESPN anchor who not only likes NASCAR, but has experienced it first-hand for years. Now, the sport has a former veteran pit road reporter and telecast host in the anchor chair at SportsCenter.

It's going to be a lot harder to make fun of NASCAR when the SportsCenter boys figure out that the person sitting beside them at the anchor desk has been there and done that.

We will update the information on where Czarniak is assigned once she joins ESPN next month. Good luck to her as she makes this career transition.

We welcome your thoughts on this topic. To add your opinion, just click on the comments button below.