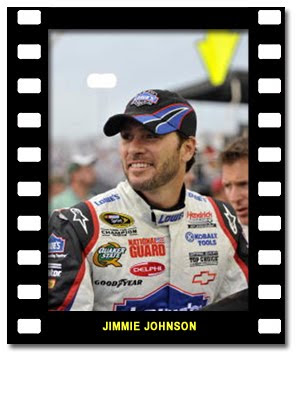 What a week of NASCAR TV news! Since we will all be watching sports car and NASCAR racing this weekend, the TDP week in review is up one day early.

We begin with recap of the changes coming to NASCAR TV this season. Kyle Petty in and Jimmy Spencer out at SPEED for RaceDay and Victory Lane. Michael Waltrip in and Kyle Petty out at Showtime for the new Inside NASCAR series. Click here to read all the details...

One tidbit added after that article was that Shannon Spake will be filling various roles for ESPN in addition to pit reporting. This includes hosting NASCAR Now, reporting stories for that show and offering content for SportsCenter and other ESPN programs. Veteran fans may remember Spake as hosting various shows for SPEED prior to her switch to ESPN.

This week TDP caved to the pressure and opened a fan page on Facebook. It turned out to be a blast! Currently, we have links up to view Jimmie Johnson's first HBO show online, pics of the new Nationwide Series cars and even a raging debate about the new Hooters sponsorship on SPEED. Click here to stop by!

SPEED entered the second week of the new Race Hub show even as NASCAR was still cracking down on what it called "negative reporting." Located right in NASCAR's backyard, SPEED is walking into a whole new challenge reporting weekday news on Monday through Thursday. Click here for an overview of those challenges.

From out of the blue, NASCAR used its own Media Group in partnership with SPEED to produce a moving and emotional Haiti Earthquake Relief special. Rick Allen, Michael Waltrip and Jamie McMurray hosted a program that used footage from many sources including Hendrick Motorsports. The result was fantastic.

Also working quite well was the first of a four episode special series on SPEED called JGR's Countdown to Daytona. Instead of dramatic hype, the program took a realistic look at the company as it moved toward the first race of the season. Footage from all kinds of sources blended well to produce a balanced hour show. Click here to read about the Haiti special and the JGR program.

Leave it to HBO to come out of the gate at full speed. The first episode of the four 24/7 programs featuring Jimmie Johnson aired on Wednesday. It treated Johnson as a millionaire professional athlete. It made no bones about what he does and why he does it. Ultimately, it put a very new and modern face on the sport at just the right time. Click here to see the episode online for free and leave a comment.

To wrap-up the week, our friends at Showtime dropped a little bomb. Fans had been advised that the Inside NASCAR series would be available for viewing online and via cell phone. We were told this by NASCAR's own TV folks. In discussing the specifics with Showtime, they were quite clear in saying as far as they were concerned, fans needed to subscribe to Showtime to see the program.

Showtime only has about 17 million subscribers, so perhaps letting the other 75 million cable homes see the show either with ads or for a nominal fee might be a good idea. Click here for a little review of the online bomb falling.

You can leave a comment at the bottom of any link by clicking on the comments button on that post. Please feel free to leave your comments on any of these topics right here as well. Thanks for taking Friday to look back so we can all finally watch some live racing this weekend. The TV schedule is on the right hand side of the main page. Thanks for stopping by!
Posted by Daly Planet Editor at 5:00 AM 14 comments: