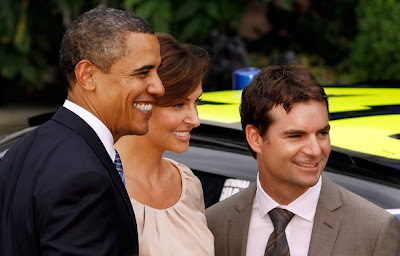 NASCAR needed a little shot in the arm as the sport closes in on the playoffs. What better place to get that than with a rain-delayed visit to the White House.

It may have seemed to some like President Obama made a short speech, worked the rope line and then gave a quick live TV interview before going back to his real job. Nothing could have been further from the truth.

Among the NASCAR group at the White House were some campers from the Victory Junction Gang Camp. Kyle Petty traveled with the group and documented their trip in words and pictures on Twitter.

The kids were brought directly into the White House and met with the President. Petty wrote: The Kids were amazing! The President spent REAL time with each one...don't care where you stand, THAT was cool...

The other participants took tours of the White House with Dale Jarrett remarking on how much he enjoyed his experience. Jimmie Johnson said the atmosphere was more laid back and he appreciated making real conversation with the President.

ESPN2's NASCAR Now pushed Dennis Leary guest hosting on Mike and Mike aside to get to the White House at 4:20PM live. That was about ten minutes earlier than the DVR's and VCR's of most working NASCAR fans were scheduled to begin recording.

The pictures showed the President working the rope line and greeting Darrell Waltrip and Rusty Wallace along the way. That certainly was an interesting dynamic to watch, but all parties seemed to have their priorities in order and Obama moved through the crowd.

Since the original schedule was off a bit, the President joined host Nicole Manske and ESPN NASCAR analyst Brad Daugherty before TV viewers heard his prepared remarks. This actually worked out well, as Daugherty and Manske allowed Obama to make his point very clearly. The following two answers really told the tale of NASCAR as far as the administration was concerned.

Manske asked if the US automakers should remain committed to the sport. "I think that it’s about as good advertising as you can get," Obama answered. "If somebody’s excited about NASCAR, that means they’re excited about cars. And we want to make sure that people know what great American cars are, and obviously it’s understandable at a time when GM has gone through some tough times, that they may need to cut back sponsorships briefly, but over the long term, if we look 5-10 years out, I think they’re going to come back stronger than ever, and I think their association with NASCAR makes a great difference."

After the President departed, NASCAR Now played-back his prepared remarks. As with most visiting athletes, the President's staff had done a good job on his short speech. Obama asked Chad if he was pronouncing "Knaus" correctly and even took a moment in typical NASCAR style to thank the guys back at the shops who could not attend.

While pointing out Mike Helton and selected dignitaries in the crowd, it appeared that this was almost a relaxing moment away from the domestic and global issues for Obama. There were lots of jokes and laughter, including Carl Edwards refusing to divulge his conversation with the President to ESPN's reporter Marty Smith.

The next step is to get the President to a race. Richmond might be the easiest travel location but Chicagoland Speedway is right near Obama's favorite city and would certainly be a winner with the area fans.

All in all, a big win for ESPN and NASCAR on what is normally a slow day for news. NASCAR Now handled the live portions calmly after having the entire schedule changed at the last moment. The President's remarks were moved onto ESPNEWs and ESPN.com very quickly.

Shortly after the festivities were over, the Internet was filled with hundreds of domestic and international stories carrying the President's simple but effective message. The power of the global media was on display.

Click here for a replay of the video interview and an outstanding article by ESPN's Ed Hinton on the long relationship between NASCAR and the White House.

After you watch the show or see the video, we would welcome your comments on this topic. This is a family-friendly website, please keep that in mind when posting. Thanks for taking the time to stop by The Daly Planet.
Posted by Daly Planet Editor at 5:00 AM 64 comments: