Your Turn: NASCAR On FOX From Talladega 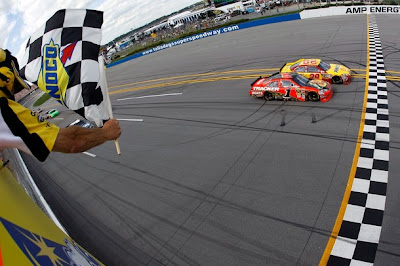 The weather was clear, the track was fast and the racing was intense.

Chris Myers started the day from the Hollywood Hotel with Darrell Waltrip and Jeff Hammond. Slice of Pizzi returned, Digger was nowhere in sight and the DirecTV contest continued. Mike Joy called the race with Waltrip and Larry McReynolds.

From the start, Joy was more conversational with Waltrip and McReynolds than ever before this season. Just like ESPN last season, the commentary was more like three guys talking while watching a race on TV. It was very different.

FOX inserted a significant number of commercial breaks, promos and billboards into the race. Eventually, it seemed that the segments of racing grew shorter and shorter. In the last hour, the commercials directly affected the ability to view and follow the race.

Joy promised that one commercial would be the last, but then FOX continued to run multiple commercials during the remainder of the telecast. Joy was clearly embarrassed, but that was only one of the issues for FOX.

Waltrip and McReynolds continued the habit of speaking about whatever was on their minds. These topics included a lot of Alabama college football and Dale Earnhardt Junior. It certainly made for a rather scattered commentary at times.

The race had several late accidents, so the green/white/checker rule was in effect. One late accident included Jimmy Johnson and Greg Biffle. FOX tried to keep up with the action, but it was a struggle.

This post is your opportunity to tell us what you thought of the NASCAR on FOX telecast of the Sprint Cup Series race from Talladega. To add your comment, just click on the comments button below. This is a family-friendly website, please keep that in mind when posting. Thanks for stopping by.
Posted by Daly Planet Editor at 10:00 PM 101 comments: