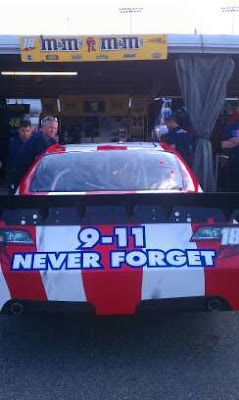 NASCAR is back on broadcast TV as the race from Richmond is carried on ABC. This is going to be a night that will start off with many 9/11 tributes and then hopefully lead into some good racing. NASCAR needs a good primetime showing right now.

Nicole Briscoe starts the telecast with Rusty Wallace and Brad Daugherty from the Infield Pit Studio. The theme of tonight is the Chase and this is going to give us a hint of how ESPN will handle the topic after four seasons of struggle.

Allen Bestwick will call the race, which will start at 7:47PM. Dale Jarrett and Andy Petree will be in the broadcast booth. Petree continues to speak his mind while Jarrett is still working on balancing his perception of being polite on the air with the reality of needing to provide sometimes critical comments on the action.

Dr. Jerry Punch, Jamie Little, Vince Welch and Dave Burns will be the pit road reporters. Tim Brewer will be in the Tech Garage. Richmond is known for hot tempers and hot brakes. Expect both stories to be told tonight.

This is clearly the first "race within a race" challenge for ESPN of the season. There are two very distinct storylines that will begin once the green flag flies. The challenge for TV is to keep track of the race and keep track of who is making the Chase at the same time. It has not been easy.

Tonight will also feature some one-time paint schemes, including the one pictured above on the Kyle Busch car. It should lend some continued feeling of patriotism as the racing action slowly simmers to a boil.

Look for ESPN to keep the cameras wide to give fans perspective on the actual racing action or fall victim once again to the temptation of zooming in to one or two cars at a time. It's been hit or miss this season. If the video framing is super-tight, that will indeed be a shame.

NASCAR is about to take a huge kick in the teeth from the NFL beginning next weekend. It is going to be very important tonight for ESPN to develop and follow-up on the emerging stories from the race tonight. Getting viewers to decide to follow NASCAR next week is the challenge for tonight.

We invite your comments on the ABC coverage of the Sprint Cup Series race from Richmond. To add your TV-related comments, just click on the comments button below. 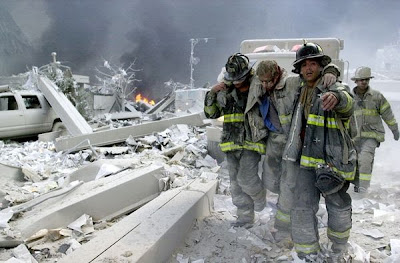 Nothing is tougher than trying to hold a professional sporting event during a time when the attention of the nation is pointed in another direction. Saturday night in Richmond, NASCAR will try to mix a key race with the remembrance of a national tragedy.

ABC will be the place for the Sprint Cup Series telecast from the Richmond International Raceway (RIR). NASCAR, RIR and ABC have combined to bring viewers a variety of tributes throughout the telecast.

"NASCAR takes great pride in the patriotism that the sport showcases every race weekend and the 10th anniversary of 9/11 is a special opportunity for NASCAR to unite and recognize those we lost and honor those who responded with courage," said NASCAR Chairman and CEO Brian France.

It will be Nicole Briscoe hosting the NASCAR Countdown pre-race show. RIR and the TV team will be working to integrate specific elements into the telecast throughout the race.

Members of the Wounded Warriors organization will be leading the crowd in the Pledge of Allegiance before watching the race as NASCAR special guests. Retired New York City police officer Daniel Rodriguez, a popular performer at key NASCAR races, will be singing "God Bless America." Finally, the U.S. Army Infantry Division Band will be performing the National Anthem.

ABC will air a special feature during the telecast titled "I Remember" that includes stars of the sport reflecting on 9/11 and their memories 10 years later. Once the race is underway, the TV announcers will go silent for laps 9 through 11 as the fans at the track wave American flags.

Many of the teams racing on Saturday night have special 9/11 anniversary tribute cars, while others have tribute accents in the sponsor paint schemes. Jimmie Johnson and other drivers and NASCAR personalities will appear throughout the race in public service announcements promoting volunteerism and charitable causes.

Sprint is also in the mix. At the "Sprint Experience" in the RIR midway, a video will begin running at 9:11AM that will feature images of the World Trade Center, the Pentagon and the memorial in Shanksville, PA. Throughout the video all of the approximate 3,000 names of those who passed away that day will be displayed. The video will last approximately 30 minutes.

This is all an effort to make sure that fans at home and at the track feel there is the proper level of respect for this weekend. It's a tribute that will be handed off to the NFL networks on Sunday. They will be offering the same type of patriotic themes.

The NFL will offer three separate tributes prior to the 1:00, 4:00, and 8:00 games, respectively. Each tribute will open with a speech by Academy Award-winning actor Robert De Niro, followed by a minute-long moment of silence with a bugler playing “Taps” at one of three sites. From there, the show will dissolve to shots from all the stadiums where play is about to begin. An American flag will cover all the fields and will be held in place by the players as the National Anthem is sung.

It looks like NASCAR's Saturday efforts fit right in. ESPN is good at this type of coordination. Look for the elements described above in the RIR race telecast.

We invite your opinion on this topic. To add your comment, just click on the comment button below. Thanks for taking the time to stop by The Daly Planet.