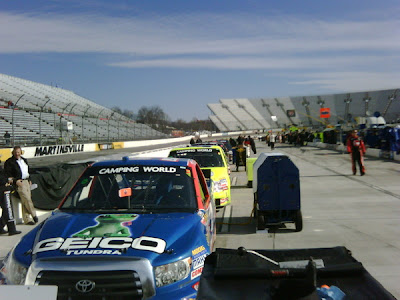 The best show of the weekend is often the Camping World Trucks at Martinsville. The beating and banging short track style is exactly why the trucks were originally created. This series was designed to serve the tracks with too few seats to attract a Sprint Cup Series date.

2009 finds them instead racing in places like Daytona that demand aero and drafting. How times have changed. This Monday at noon ET the trucks return to their roots with the rain delayed Martinsville event on SPEED. Thanks to Max Papis for the image of the trucks lined up for the race today.

The shift from Fox over to SPEED has changed the TV announcer assignments. Out are the NASCAR on Fox guys and in are Rick Allen, Phil Parsons and Michael Waltrip. This week Ray Dunlap is on vacation, so Krista Voda will step in because there is no pre-race show this week. Joining Voda on pit road will be the versatile Adam Alexander.

This might have been a good weekend to give Wendy Venturini an opportunity on pit road, since Venturini and Hermie Sadler have been working very hard on RaceDay this season with solid results. There should be an expanded role for her down the road among all the NASCAR programs and races on SPEED.

Digger is gone and the SPEED TV crew should return the focus of the event to racing. There has been a solid television production package from the CWTS for several seasons now, with good racing and outstanding coverage.

This will be a "hurry up" race that will start shortly after SPEED takes the air. The field is full of all kinds of experienced and very inexperienced racers, so the action should be interesting as the leaders start to lap the backmarkers rather quickly.

The unknown factor in the race will be the new CWTS rules that limit the pit stops to either tires or fuel. Depending on how many cautions wave, this could cause the entire field to pit twice to get both. That is going to raise the risk of problems happening, especially with trucks on new tires trying to exit the pits after getting fuel only.

The new pit rules also bring into play new strategies like staying out on the same set of tires for a much longer time than anyone has tried before. There is no ability to stretch the gas mileage, so this strategy should be interesting to watch.

This post will host your comments about the CWTS race on SPEED. To add your TV-related comment, just click on the comments button below. This is a family-friendly website, so please keep that in mind while posting.

Thank you for taking the time to stop by The Daly Planet.
Posted by Daly Planet Editor at 10:00 AM 64 comments: