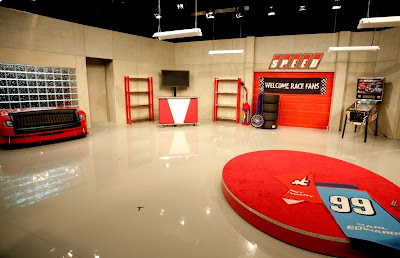 This is the end of the third season of coverage with the current NASCAR TV partners. The two weekday NASCAR news programs, Race Hub on SPEED and NASCAR Now on ESPN2, also ended their season weeks ago.

ESPN has advised that NASCAR Now will return on February 1st. SPEED is starting the new season of Race Hub on January 11th.

Monday morning, the Associated Press announced the results of its annual Male Athlete of the Year voting. This award is destined for athletes in mainstream sports who garner the recognition of news editors nationwide.

This year, for the first time in the 78-year history of the award it was given to a NASCAR driver. His name is Jimmie Johnson. Like so many other NASCAR news items that have happened in the last several weeks, this story came right out of the blue.

ESPN Senior Reporter Marty Smith phoned in to ESPNEWS with the story and his reaction. In the following hour, Jimmie Johnson also phoned in and talked with the TV anchor. It was a nice gesture, but few NASCAR fans were listening.

The scope of NASCAR has proven that a weekday TV show during the off-season is sorely needed. In addition to the Johnson news, NASCAR has added Road America as a Nationwide Series race after Milwaukee was removed from the schedule. IRL driver Danica Patrick announced her intentions to race in NASCAR and tested in Daytona.

From Kyle Busch starting his own Camping World Truck Series team to the sudden health struggles of a top NASCAR executive, the news in the sport did not take a break. Unfortunately, the TV networks did.

NASCAR's online presence is fractured at best. The official NASCAR.com website fights every day with Jayski's homegrown effort over NASCAR news. A wide variety of media websites represent TV networks, online newspapers and specialty magazines. From scenedaily to FoxSports, the NASCAR Internet information sources all have their own agendas.

In terms of off-season TV, it seems that SPEED would be in the best position to handle this challenge. ESPN is jammed with other sports during this time of the year and the beginning of February is a good time for that network to return simply from a logistical standpoint.

This was the first season of Race Hub and SPEED took a big chance on starting a show late in the season that required a lot of time and effort. The program normally runs Monday through Thursday, but that might be a bit much during the off-season. On the other hand, it could be gangbusters.

There are lots of NASCAR personalities around the area that would certainly like to get a shot at national TV exposure during this time for a wide variety of reasons. SPEED broke into regular programming for both the Patrick and Busch press conferences and carried them live. Busch actually used SPEED as the location for his event.

Perhaps, SPEED will re-think this darkening of the studio for next season. With news coming in from all three national series and many other sources, there is little doubt that NASCAR has joined golf and tennis as year-round sports. Until the time that there is a NASCAR TV network, fans are looking to the existing TV partners to fill in the gaps.

TDP welcomes your comments on this topic. To add your opinion, just click on the comments button below. This is a family-friendly website, please keep that in mind when posting. Thanks for taking the time to stop by The Daly Planet.
Posted by Daly Planet Editor at 9:00 PM 44 comments: 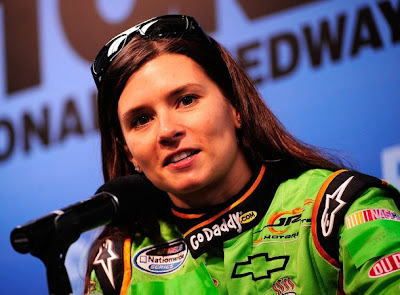 It will be February 13th when ESPN begins its fourth season of covering the Nationwide Series. The upcoming Saturday afternoon race is shaping up to be just like last year. High-profile Sprint Cup Series drivers cross-over and dominate. Even the ray of Nationwide sunshine named Brad Keselowski is now a full-time Cup driver.

The Nationwide Series is the only NASCAR series that ESPN televises from start to finish. While the network handles the final seventeen Sprint Cup Series races, that coverage does not start until July. When the current TV contract was announced, ESPN President George Bodenheimer called the Nationwide Series "a diamond in the rough."

Over the last three seasons, instead of polishing that diamond, ESPN has thrown it on the floor and stomped on it. Instead of televising the Nationwide Series as a feature presentation, the TV production team has instead singled-out the Sprint Cup Series drivers in each race and made them the entire story.

"ABC Busch Series Pre-Race Show Never Mentions The Race" was the TDP column from April of 2007. Click the title to read it. Infield studio host Brent Musburger led an hour long pre-race show that spent the entire time discussing the Sprint Cup Series race the next day while fawning over the big name drivers. It was embarrassing.

Only months later, ESPN did it again. This time it was Dover with Suzy Kolber hosting. Click here to read the column. Dale Earnhardt Jr. signing Jeremy McGrath to a development contract in a regional series dominated the program. The stories of the series about to race could wait.

After throwing the Nationwide Series on the floor, ESPN begins to stomp on it at the exact same time every year. On the first Saturday of the college football season, the Nationwide Series becomes an afterthought. Gone is the pre-race show because of football games scheduled to run right up until the start of the races. This past season was particularly brutal.

In the blink of an eye a NASCAR series that has been televised since February becomes nothing more than a dirty rock on the floor bearing the shoe prints of the ESPN programmers. The vast majority of the Nationwide Series practice and qualifying coverage during this part of the season is done by SPEED.

On many weekends, the NASCAR on ESPN team simply shows up to do the race and then the networks returns to endless college football once again. Nationwide Series highlights do not make it to SportsCenter unless there is a spectacular wreck. ESPNEWS will never cover NASCAR on a Saturday in football season. That is sacrilege.

Patrick is exactly the kind of sports personality that ESPN understands. She attends the ESPY Awards, runs in ABC's IndyCar races and graces the Sports Illustrated swimsuit issue. She comes with the hype of a high-profile sponsor and is a face recognized by fans outside the sport.

The story of her potential presence at the Daytona race will instantly change the TV coverage from endless interviews with Sprint Cup Series drivers wearing their "Saturday firesuit." ESPN will be forced to follow the storyline of a driver who is not going to compete even once in the Sprint Cup Series this season. Instead, she will once again be trying to win the Indy 500 on ABC.

Daytona is the perfect place for Patrick to make her first start with the goal of getting seat time and earning respect from the veterans. The build-up to the race would be beneficial for all parties concerned. Patrick gets sponsor exposure, NASCAR gets the national media attention and ESPN gets a story it can hype across all the networks and websites in the ESPN family.

Once the Fontana weekend rolls around, the only thing being discussed by the media is who won the Daytona 500. The Fontana Nationwide Series race is not the place to make a debut under the shadow of that major story, especially if it was compelling.

We should know shortly about Patrick's plans for the 2010 season. There is no doubt that ESPN, NASCAR and many fans are waiting to know exactly where this story will begin.

TDP welcomes your opinion on this topic. Just click the comments button below to add your thought on this topic. This is a family-friendly website, please keep that in mind when posting. Thanks for taking the time to stop by The Daly Planet.
Posted by Daly Planet Editor at 8:00 PM 44 comments: