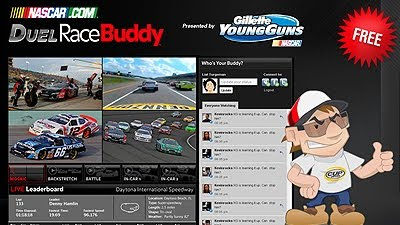 As we move into the new racing season, the Turner Sports folks have already announced that the Camping World Truck Series will be the first to have a full time online application. Called TruckBuddy, every race will have extra race cameras, in-truck views, scoring information and more available online at no charge. The truck series races are televised by SPEED.

This brother of the original RaceBuddy was introduced at Martinsville last year to positive reviews. All of these online applications are hosted at the NASCAR.com website. Turner Sports runs NASCAR.com and also holds all of the online content rights for the sport.

FOX begins 2011 Sprint Cup Series coverage with the Daytona 500. Unfortunately, no announcement was made concerning RaceBuddy for the FOX races this season. The difference between FOX and SPEED is easy to understand. FOX is an over-the-air broadcast network, while SPEED is distributed directly by satellite and cable TV.

Current SPEED honcho David Hill is the former president of FOX Sports and always said he would not allow online streaming in order to protect the exclusivity of the telecast for the FOX affiliates. The issue on the table is that online streaming of the race itself and use of the RaceBuddy application are two completely different animals.

Turner Sports designed "Buddy" to be offered as an addition to a NASCAR TV telecast. The actual feed of the TV program, including the announcer audio, is not included. Used on the Gatorade Duels, the trucks and TNT's Sprint Cup Series races this online concept has encouraged fans to get more involved in creating their own race experience.

It's certainly not clear why any FOX local station would have a problem with two individual cameras, an in-car feed and an aerial shot being streamed online. In fact, there are several very positive elements that RaceBuddy provides to actually support the TV telecast.

One of the biggest fan frustrations is the inability to see the race as it continues during frequent TV commercial breaks. Once again this season, NASCAR and the Sprint Cup Series TV networks have been unable to make the side-by-side commercial format work for the race telecasts. That means approximately one-third of each race will be lost for TV viewers.

RaceBuddy allows fans to continue to watch the telecast during commercials but also keep an eye on the live action. The battle-cam, pit road cam and aerial views allow fans to see what is going on and anticipate the return of the telecast after the commercial. When the live telecast resumes, the focus shifts back naturally to the TV and the full production of the race.

Also lost in the shuffle is the fact that RaceBuddy offers a location for fan chat and customized scoring information. Currently, fan chat is scattered across the Internet and social media sites. Scoring is provided by a silent ticker that traces across the top of the TV screen.

One of the thrusts of NASCAR's agenda this season is to reach out to the younger demographic that used to comprise a key element of the sport's fan base. Unfortunately, NASCAR telecasts ask young fans to sit for three hours watching on a machine with the only option being a volume control. In a world of interactive and online youth, the result has been predictable.

The bottom line is that RaceBuddy gives younger fans who are used to being interactive with their media that chance without compromising the integrity of the television presentation. These two elements can exist together in a cooperative environment that actually strengthens all of the parties involved.

TV gets something that can take away fan anger about commercials without costing the networks a dime. Turner gets to sell a RaceBuddy sponsorship and move forward with the long-neglected online development of the sport. NASCAR gets an online application that offers younger fans a new level of interactivity.

If FOX, Turner Sports and NASCAR cannot work out a deal it does not make a bit of difference what ole DW says, how fast the cars go or who wins. In 2011, a major professional sport like NASCAR is simply not going to thrive without a focused online application for every live event.

NASCAR should be scrambling to make sure that the Daytona 500 is seen on RaceBuddy around the online world in a manner that will make Internet users want to find and watch the full TV coverage. For a company deep into its own online ventures, the FOX attitude on this topic is hard to understand.