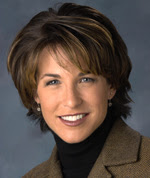 Added to this shocking change is the fact that Kolber will also host the NASCAR NEXTEL Cup pre-race show on ABC Sports when the network takes over the Cup Series. So, she is in as the Busch Series and the NEXTEL Cup Series pre-race host for the stretch run of the season. Alan Bestwick...out.

Finally, saving the best for last is the news that Brent Musburger will be returning to thrill NASCAR fans with his racing knowledge. "Brent's big event presence combined with Suzy's reporting and anchoring skills will set the stage for NASCAR's exciting stretch run," says Norby Williamson, ESPN's VP of such things.

So, its official. Musburger and Kolber will lead fans down the homestretch and through the "Chase for the Cup." This news comes only two races after Alan Bestwick was installed as the NASCAR Countdown host because of the disaster that the pre-race show had become.

Bestwick's credibility and popularity with the fans was an instant relief to the attempts to host this show with Musburger, Chris Fowler, and Erik Kuselias. Now, Bestwick is gone and another ESPN in-house announcer with absolutely no NASCAR experience will be the face of the pre-race show for the network. This is a network in its first "new" year of NASCAR coverage and struggling for credibility with the pre-race broadcasts.

Certainly, ESPN has every right to put together its own team for this sport. But, with Mike Massaro and Alan Bestwick on pit road, its downright amazing that anyone believes the sport will be better served by a non-racing announcer with no NASCAR experience. If Kolber is teamed with Brad Daugherty alone on the set as the NEXTEL Cup pre-race team, someone is going to have a whole lot explaining to do to NASCAR fans nationwide.

The Daly Planet welcomes comments from readers. Simply click on the COMMENTS button below or email editor@thedalyplanet.tv if you wish not to be published. Thanks again for stopping by.
Posted by Daly Planet Editor at 4:46 PM 35 comments:

Searching For The Next Eli Gold 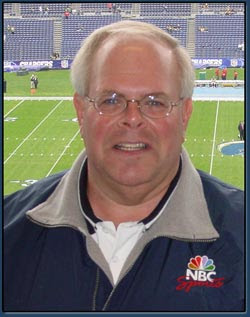 Since February of this year, The Daly Planet has been writing about the various programs offered by the NASCAR TV partners. Some have been fantastic, and some have been well, slightly less than that. But, as with everything in life, this mix is to be expected. Two things, however, stand out as clearly missing. There is no TV show that involves the fans, and the next Eli Gold has not emerged from the pack of current announcers. The sport of NASCAR has no "host," and nowhere for fans to get involved.

When NASCAR was still on TNN, ESPN, and TBS Sports I helped to start a new company called Prime Network. One of our goals was to get some motorsports programming onto the Regional Sports Networks throughout the country. After working on ESPN's NASCAR coverage for years, I was keen to strike a deal for a new NASCAR program. There was only one problem...NASCAR wasn't having any of it.

Even back in 1990, NASCAR had absolutely no interest in the TV business, and they made that very clear. They understood the power of radio, and the MRN brand had been a success for them over the years. Unfortunately, each individual track owner was in control of the TV rights for their races. This left an incredible hodge-podge of a mess in TV land. But, Prime Network did not want races. We wanted drivers. This led to a lot of effort to convince the sport that putting drivers on TV "outside" of their cars could be good for the sport, and the sponsors.

NASCAR finally relented and decided that if "their drivers" were going to be on TV, there had better be a man at the helm that they trusted. So, along with permission to put a new show on the air called This Week in NASCAR, we got MRN announcer Eli Gold as part of the deal. No one at the time had any idea what was about to happen over the next several years. Least of all, the Executive Producer of the series. That would be me.

One look at Eli tells you firmly that he is a radio personality. Larger than life in more ways than one, Eli is not the slim and trim TV type that continues to dominate the sports airwaves even today. But, what Eli had in his pocket was the NASCAR credibility that comes from being on the radio across the nation. That distinctive voice was heard in the corner store, the neighborhood bar, the local garage, and on the transistor radio while the boys were out fishing. Eli had already been everywhere, without ever being on TV. So, the experiment began.

Starting on Thursday nights from hotel ballrooms scattered across the nation, This Week in NASCAR with Eli Gold was born. A nervous crew wondered if anyone would watch, if any driver would want to be a guest, and if any fans would call the "800" number and ask a question. With a low-end cable TV budget, Producer Tom Hoch Sr. would try anything to get a free location, and people in the audience. It helped that fans who came to the show would be able to ask questions of the guest.

The first couple of shows were a novelty, and things went well, in a very basic kind of way. Some errors were made with alcohol sales, rowdy crowds, and noisy hotel venues. But, slowly people started to find this show and see the interesting mix of drivers and personalities, all hosted by Eli. No matter if it was the hard-driving and intense Dale Earnhardt Sr. or the completely laid-back Bill Elliot as the guest, Eli made them all feel at home. He made them feel like they were on the radio with him.

Although we did not know it at the time, the cast of characters that filled the chair opposite of Eli was the generation that transformed NASCAR. From a fresh-faced Jeff Gordon with a mullet, to Handsome Harry Gant and Junior Johnson, this series saw it all. At the time, there was no NASCAR Images, no NASCAR Digital Entertainment, and no NASCAR.com. Each Thursday night, there was just This Week in NASCAR with Eli Gold. It was simple, informative, and often times hilarious.

As the years went by, the show graduated to larger venues. Eli was even invited to open Daytona USA with Dale Earnhardt Sr. as the guest. That was a show to remember. Earnhart loved to be a guest, because Eli would protect him from the "TV stuff" and allow Dale to speak directly with the fans on the phone, and in-person at the show. Think about that concept. Each week, on national television, one driver or owner would speak directly with the fans for one hour.

Eli became a celebrated "host" for the sport and was in-demand to "MC" a wide variety of events, conventions, and awards. The show became a platform for driver announcements, sponsor unveiling's, and classic reunions like Bobby and Donnie Allison with Cale Yarborough. While doing a show at the Bodine Garage in upstate New York, a dog walked across the set and someone delivered pizza. Fans felt close to the sport, because this type of show complemented the racing action on the track. It showed the drivers as people.

Eventually, the program faded as Prime Network became Fox Sports Net. The show moved to TNN, and then was summarily cancelled for some sort of trucks racing in the mud at stadiums. The entire executive team at TNN was fired, and then the network was sold. This is the world of TV, where everything changes sooner or later. Eli held a high-profile for a while, but eventually settled back into his comfortable life as the voice of Alabama football and several other sports. This Week in NASCAR was no more, and it has never been seen again.

Now, as the sport nears the All-Star race in 2007, NASCAR continues to struggle away from the track for a relationship with television. Rumors of a NASCAR-owned TV Network continue to abound, with the new NASCAR Hall of Fame as its home base. No NASCAR shows have migrated into the mainstream on non-sports cable networks. No NASCAR presence continues to exist on the Regional Cable Networks, except for replays of old races. While "Ricky Bobby" is on Larry King, and Carl Edwards on CSI, there is no NASCAR call-in show on TV. No way for Tommy in Little Rock to ask Dale Junior what kind of music he likes, what model car he drives, or what is his favorite track.

SPEED Channel does two hours of RaceDay every week, but never talks to a fan. SPEED never shows us the fan's home-made signs, and never finds out where everybody is from. No one gets a "shout-out" to their mom who lent them the money to go to the race with their friends. On Trackside, there is never a question from the audience, only random shouts. Fans are window-dressing, not participants. Over at Tradin' Paint, drivers and the press get an opinion, but never a fan. Even on Inside NEXTEL Cup, the "fan" questions are as sanitary as Despain's description of the racing "action."

Over on ESPN, their attempt at "hosting" went astray very early. When Brent Musburger said hello from the infield "Fan Zone" at Daytona, there was one thing missing...the fans. They were kept far away behind a rope. Never has a fan's voice been heard on NASCAR Countdown or NASCAR Now. The only thing that matters to ESPN...is more ESPN. They have made that very clear.

NASCAR desperately needs to re-establish real and meaningful TV contact with its fans. We all see the slick shows from NASCAR Images. The shiny cars spin through the sunlight while the deep announcer's voice booms out dramatic lines. I always expect him to say "Jimmy Johnson drives through the frozen tundra of Lambeau Field and into turn three." Hey, lighten up already, its just Martinsville.

Maybe, with the new crop of announcers that is currently on the NASCAR trail, one wise network executive will step-up and propose a show that allows the fans to take control. Now, questions can come from computer cams, voice mail and media files sent by email. Drivers can find a place where they do not have to "dance" for their sponsor, drink their drink, and wear their shades...even at night.

After many years of This Week in NASCAR, questions were often times repeated. But with Dale Earnhardt Sr. as a guest, one caller politely asked "I have always wanted to know something...what is your favorite flavor of ice cream?" Even after years of interviews, features, and championships, Earnhardt smiled widely. He knew he was experiencing with a fan another new and original moment. That is why we created this show, and that is why it is needed again...desperately. Just for the record, it was chocolate.

The Daly Planet welcomes comments from readers. Simply click on the COMMENTS button below or email editor@thedalyplanet.tv if you wish not to be published.
Posted by Daly Planet Editor at 12:03 AM 7 comments: