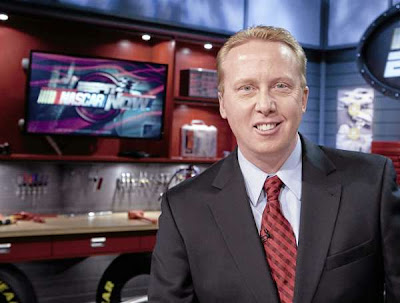 The sports spotlight might have been on the NCAA men's basketball championship game, but NASCAR held its own Monday thanks to two very important TV series that have finally come of age.

ESPN2 has been through all kinds of changes, but has now settled into a very nice rhythm with the daily NASCAR Now program. Allen Bestwick is the usual Monday host, with Mike Massaro and Nicole Briscoe alternating weeks in the studio. All three of these "talent" also travel and report from the field.

While Bestwick was clearly the right host for the one-hour Monday show, the network was slow to figure out just who to surround him with as panelists. These three slots have been filled by a variety of ESPN analysts, NASCAR personalities and one-hit wonders like Geoff Bodine over the last few seasons.

Emerging from the wreckage has been the singular presence of Ricky Craven. This season with Ray Evernham's surprise departure, Craven has been put front-and-center on the big Monday show and on the racing weekends. He has emerged as ESPN's top NASCAR studio analyst.

Monday, Craven joined two faces that were new to the show but familiar to many NASCAR TV viewers. The network went outside of the ESPN family to sign NASCAR veterans Kenny Schrader and Johnny Benson for frequent appearances this season. The results have been wonderful.

It's been many years since Schrader and Benson shared an hour of NASCAR TV on Monday nights, but the chemistry remains. Paired with Craven and Massaro filling-in for Bestwick, the Monday show had a completely different vibe with veteran observations about the weekend combined with a tongue-in-cheek sense of humor long missing from this program.

Network personalities like Dale Jarrett, Rusty Wallace and Brad Daugherty have never fit-in on this show. They are too politically correct, conflicted by personal racing interests and unable to speak their mind. While reporters like Marty Smith and Ryan McGee are media professionals, the perspective they bring is that of a journalist.

It should be very interesting to watch the informal styles of Schrader and Benson influence the show as the season moves forward. Earlier on Monday, Schrader appeared on ESPN's flagship SportsCenter show. He was paired with a news anchor who had absolutely no idea about NASCAR.

Schrader's patience and sense of humor served him well once again as he made all the relevant points and analyzed the action. Perhaps, after five years of constantly struggling to get NASCAR content onto other ESPN programs, the secret all along was to use a 55 year-old veteran driver from Fenton, Missouri.

NASCAR Now has Schrader, Craven and McGee next Monday with Bestwick returning to host. Massaro hosts the weekday shows while Briscoe travels to Texas as a reporter. After some early stops and starts, this series is now a must see for NASCAR fans throughout the season. 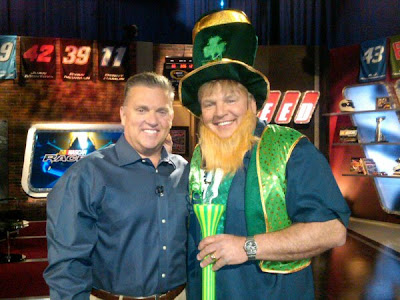 It took SPEED several years of being challenged before the network stopped protesting and embraced the concept of a Monday through Thursday show to fill the gap left between programming from the race tracks. The resulting series is RaceHub.

After trying to rotate various on-air talent through the host position, it became rather clear that in order to validate the series there had to be a full time host. Steve Byrnes got the call and made a big professional and personal decision to head into the studio.

The next suggestions included increasing the programs to an hour in length and finding a reporter who could work the NASCAR shop beat full time. SPEED made the decision to do both this season, hiring relatively unknown local sports reporter Danielle Trotta and setting the show times at 7PM ET. Both moves had surprising results.

Trotta has been a natural at speaking to drivers, crew chiefs and owners. She has developed a friendly style that still gets plenty of information and opinion from her interview subjects. Using SPEED's Charlotte, NC location to full advantage, Trotta is usually the only national TV reporter in the shops on Mondays.

Byrnes has embraced the one-hour format, regularly bringing various SPEED and FOX analysts into the studio for updates on topics and issues. Chad Knaus is also a favorite of Byrnes and he appeared on the program Monday.

It's easy to overlook the decades of experience Byrnes has under his belt. He does not call attention to himself and his humor is self-effacing. His true gift is interviewing subjects who are not very polished on TV. From young drivers like 18 year-old Johanna Long to Hall of Famers like 79 year-old Junior Johnson, Byrnes listens first and then asks the right questions.

The executives at SPEED have continued to keep Jimmy Spencer on RaceHub, constantly tinkering with his act. Although not a very convincing leprechaun, Spencer is best when he is answering viewer feedback and interacting directly with the fan base. It should be interesting to see what the new management at SPEED ultimately does with Mr. Excitement.

On Tuesday, RaceHub has Martinsville truck series winner Johnny Sauter and his crew chief Joe Shear in studio. Matt Kenseth will also be interviewed. There will be a recap of the K&N East Series race from Greenville-Pickens Speedway and Ray Dunlap will update the issues surrounding Rick Ware Racing, including the strange dust-up with driver Jeffrey Earnhardt.

We invite your opinions on these two television programs. To add your comment, just click on the comments button below. This is a family-friendly website, please keep that in mind when posting. Thank you for taking the time to stop by The Daly Planet.