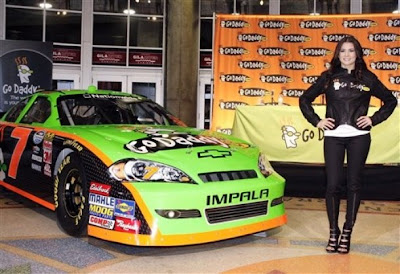 It started with a hastily called press conference that caught almost all of the NASCAR press corps flat-footed. Most of them had just returned to Charlotte from Las Vegas and the Sprint Cup Series banquet.

It was only then that they learned of a high-profile press conference being held in Phoenix, AZ near the Go Daddy corporate headquarters. In typical Go Daddy style, CEO Bob Parsons put out this message on Twitter:

"I've got a hot date with DanicaPatrick tomorrow. She asked me to check out her new GoDaddy.com car."

Well, while Parsons attended the press conference almost all of the NASCAR media did not. One veteran motorsports writer who actually lives in the Phoenix area is named Michael Knight. Click here to take a moment and read his feelings on just how well organized the Go Daddy press conference really was behind the scenes.

Knight had some choice words for the Go Daddy PR effort and its coordination:

Knight suggested that perhaps few invites were offered because that would have required Patrick to answer actual questions from the racing media on relevant topics. SPEED advised that they were not in the loop on this media event and would provide no coverage. ESPN also had no reporter present.

Once things got underway, the actual press conference was streamed online at GoDaddy.com and had no live television of any kind. After the brief and very polite media presentation that featured Patrick, Parsons and Kelly Earnhardt there was a media conference call.

Patrick advised on the phone with reporters that she did not know the actual schedule of races she would run in ARCA and the Nationwide Series. She remembered being briefly in a stock car eight or nine years prior. She noted that she is a competitive person looking for a new challenge. Patrick successfully held off any release of information or a peek into her actual motivation or personality.

Meanwhile, Parsons said that the thought of Patrick working her way up the NASCAR ladder and eventually taking over the #5 Go Daddy Sprint Cup Series car currently being driven by Mark Martin made his eyes twinkle. Earnhardt added that Patrick's Nationwide series ride would come with points and allow her to be locked-in to make the field at the start of the season.

This was the opening act in the Patrick transition to stock cars. Last Sunday, Mike Davis from the JRM PR staff advised on Twitter that Danica and team had gone to Orlando and tested at the one mile Disney Speedway circuit.

As if on cue, a media release then arrived Monday from SPEED with the following information.

This time, it is the NASCAR media directly that is being led by the nose down the Danica trail. It is assumed that Patrick is getting live national TV coverage to simply announce which select ARCA and Nationwide Series races she will run. The team management, the car color and the sponsor are already known.

The presence of Patrick has already twisted the NASCAR media dynamic with the words "Jimmie Johnson" seemingly not being heard at all on the Internet or TV anymore. Suddenly, a part-time Nationwide Series driver has live national TV coverage to announce her limited schedule.

Since ESPN carries all the Nationwide Series races, do not be surprised to see ESPNEWS add live or slightly delayed coverage to the existing SPEED package. Reporters on-site will be tweeting live and then filing online stories shortly after the event is over. No doubt Sirius Satellite Radio will also be represented.

This will be the first time Patrick will be face-to-face with the majority of the NASCAR press corps who have plenty of time on their hands and plenty of questions to ask. This time, Patrick will be treated as a rookie NASCAR driver with zero experience in stock cars and a whole lot to learn.

It should be interesting to see if Patrick rises to the occasion and embraces the NASCAR media and fan base or continues to be aloof and disconnected from the sport that she desires to be perhaps her next full time racing destination.

TDP will live blog the event on Thursday. In the meantime, where are you coming down on the Danica issue after these last two weeks of announcements? Are you tuning-in on Thursday to see her NASCAR and ARCA schedules revealed? Is there a curiosity factor growing or are you waiting until she turns a wheel at Daytona?

To add your opinion on this media topic, just click on the comments button below. This is a family-friendly website, please keep that in mind when posting. Thanks for taking the time to stop by The Daly Planet.
Posted by Daly Planet Editor at 12:05 AM 33 comments: