Its "NASCAR Now" And Here We Come 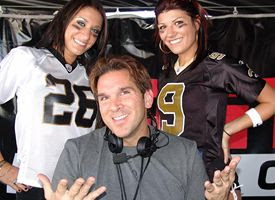 The wheels came off of this ESPN franchise Monday in spectacular fashion. Splashing in the deep end of the pool for his on-air life, Erik Kuselias decided to pump-up the volume and try to yell his way through the one hour edition of NASCAR Now. Unfortunately, volume is no substitute for experience.

Tim Cowlishaw and Kuselias are a tag-team comedy act where NASCAR is concerned. Cowlishaw loves to "needle" anyone in sports, and racing is no exception. He threw in the dry comments and the subtle digs as Kuselias yelled his way through the Pocono NEXTEL Cup highlights. They are the "Martin and Lewis" of NASCAR Now. Lots of noise and very little content.

Wendy Nix was on-scene at Pocono, and delivered a nice crisp report from the track. Nix is new to NASCAR, and her presence was noticed by a whole lot of male reporters in Pocono. Apparently, they did not mind the rain delay in the Media Center.

Does anyone from NASCAR watch this show? They are never given an opportunity to respond, and regularly take it right in the teeth from Kuselias, Cowlishaw, and ESPN.

Boris Said was the sacrificial lamb on the set, and he tried his best to dispute the hype and suggestions of dishonesty by NASCAR. Boris is outnumbered on the set by the "hype kings," and in this show they were determined to yell all the way to the end. Even Boris just shrugged his shoulders and gave up. Tough to make sense when no one is listening. No smiles on Mr. Said's face in this show.

Ryan Newman was the new target today. Boris carefully stated the improvements that the Penske team has recently made, but that was not enough for Cowlishaw. The King of Around The Horn is absolutely full of nothing but outlandish statements on NASCAR Now, and adds nothing in the content department. The entire show changes when Kuselias is the host and Cowlishaw is alongside. It turns into a chaotic mess of driver soundbites and then sharp-edged commentary from Cowlishaw. Newman apparently can't "win." Ridiculous.

Its tough when the panel talks about Jimmie Johnson's blown tire as the "worst finish of his career!" After even more loud hype, both Johnson and Chad Knaus weighed-in with interviews quietly explaining that there was no problem at all, they just blew a tire. Marty Smith put it all in perspective, and framed the "worst finish" in terms of the "Chase" format, which wipes the slate clean. There is absolutely no problem with Johnson making "The Chase." So, all the NASCAR Now hype was...just made up? Was that Marty nodding yes?

Halfway through the show, there was an attempt to discredit NASCAR again. Kuselias, who is actually a lawyer in real life, had decided that the "caution flag issue" was something that is not set-in-stone, and he could exploit it. When he has Cowlishaw on the set, the door is wide open to throw as many stones at as many people as possible during the hour. This time, it was a conspiracy theory that Jimmie Johnson's flat tire was "ignored" in order to get the race to halfway.

Reporter Angelique Chengelis was live to answer Kuselias allegations with facts. Kuselias did not like that at all, answered back with a snide comment, and moved along to Marty Smith without even a word to Chengelis. For some reason, Marty Smith was forced to report on a non-story which was the rumor that Jeff Gordon's plane had crashed. Why was this story discussed live on national television? There was no problem, there was never a situation, and no one else felt the need to report this information. The ESPN hype now extends to the reporters?

Thirty five minutes into the show NASCAR Now deviated from its normal obsession with the Cup Series, and showed very brief highlights of both the Truck and Busch Series. It continues to be very strange that the ESPN2 Busch Series announcers do not offer a "wrap package" from the track for NASCAR Now. ESPN has spent millions of dollars to televise the entire Busch Series, and with the likes of Rusty Wallace and Andy Petree on-site, why do they not appear in the Monday one hour news show? Only the lack of communication between ESPN departments explains this mistake.

ESPN is five races away from stepping up to the highest level of NASCAR racing for the rest of the season. If they can't get their Busch Series announcers on their own Monday news show, imagine the fun when the NEXTEL Cup and Busch Series are both on ESPN.

Last week, viewers overwhelmed The Daly Planet with emails asking for Allen Bestwick or Ryan Burr to host NASCAR Now. Both these talented men have hosted some individual programs before, but do not appear regularly. Erik Kuselias is obviously struggling, and could use a break. Now, over four months into the NASCAR season, there is no doubt that he does not like racing, does not follow it, and does not respect it. When he gets back to talk radio, he will be in heaven. Lots of yelling, and lots of sticks-and-balls.

The buzz that Bestwick first created at ESPN when he stopped in Bristol to host a mid-week version of NASCAR Now was huge. People stopped in the hallways. There was Allen Bestwick from NASCAR. They finally had a "racing guy" at the helm, and his first show was fantastic. How hard can it be to have that on a regular basis?

Even today as NASCAR Now "rolled out" with the tired Aerosmith version of "Back In The Saddle Again" viewers could only imagine the information that "could have been" communicated in this hour if racing guys were in charge.

There were so many more stories from Pocono and Nashville, and so many good human interest stories like Chad McCumbee making the NEXTEL event, and then winning the ARCA race in the Petty Victory Junction Gang Dodge. Viewers may remember that Allen Bestwick patiently led young Mr. McCumbee through his first national TV interview a short while ago on NASCAR Now.

It would have been nice to follow-up with highlights and an interview since McCumbee finished 25th and on the lead lap, but many wishes of race fans have been left on the table by ESPN2 this season. This is just one more. Do you think Wendy Nix, the only NASCAR Now reporter at Pocono, would even know who Chad McCumbee is?

The Daly Planet welcomes comments from readers. Simply click on the COMMENTS button below, or email editor@thedalyplanet.tv if you wish not to be published. Thanks again for taking the time to stop by.
Posted by Daly Planet Editor at 5:56 PM 10 comments:

The Daly Planet uses the information from the TV networks and email to review a program when there is content to discuss. This means that some programs that are working just fine might not be reviewed. This is an opinion-based media project, and not a functional TV review site.

How often is your site updated?

A new column is offered every day, with several offered on Sunday and Monday, after the racing weekend. The Daly Planet will continue to be updated every day throughout the NASCAR season.

Why don't you publish press releases or NASCAR news about TV issues?

There are plenty of websites that offer this information. Jayski.com is a friend of The Daly Planet, and is updated with media information regularly. Our function is to offer opinion that will start conversations on this site, and others.

Do you now work in the TV industry?

No, I am not an employee of any TV network, or production company. I am not generating revenue from my site, and do not work for any type of Internet company. I left the TV business several years ago, and do not plan to return.

Why are people upset with your articles?

This site gives the fans an opportunity to speak about the TV coverage of NASCAR. The TV networks will not provide that, the media outlets will not provide that, and the commercial NASCAR sites will not provide that. Some network types are upset that the same kind of scrutiny they place on NASCAR drivers, owners, and others is being done to them. We just want them to know that when they are on the air, we are watching. Its no different that a NASCAR driver who has every lap of practice, qualifying, and racing on national TV. There is always someone watching them, and second-guessing their every move. Now, someone is watching the watchers.

What are your future plans for The Daly Planet?

Currently, we are deciding how to expand for the "Chase" portion of the season. We may add a podcast summary of the weekend's NASCAR TV programs, and possibly move toward establishing a community that discusses racing on TV with a broader scope.

How has the feedback from the TV networks been so far?

There have been great emails about a wide variety of subjects, both agreeing and disagreeing with columns that were posted. Some networks are open and honest, while others are caught-up in huge media company rules that prohibit employees from even commenting about their work. Many personal emails have been received about individuals mentioned in specific stories. As usual, all email is confidential and will never be published or referenced in any column.

Why won't you expand to talk about other series like F-1 or IndyCar?

This is the first year of this project, and after the NASCAR season is over we will make a decision about expanding to cover other series. NASCAR generates more TV than almost any other sport in the world. The Daly Planet has already eliminated the NASCAR instructional shows, the "reality" shows, and the NASCAR-themed entertainment shows from the menu this year. Next season, there may be hundreds of hours of new NASCAR programs on several new networks. Once the networks announce their series for next year, we will decide if expansion is going to work for the time we have allocated for this project. But, thanks to the many folks who would like to discusse F-1. NHRA, IndyCar, and more.
Posted by Daly Planet Editor at 12:10 PM No comments: