NASCAR Now: As The Host Turns 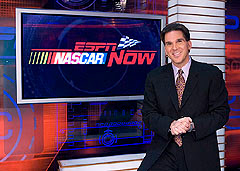 Earlier this week, a fresh face appeared as the host of NASCAR Now, ESPN's daily racing show. It was Doug Banks, a current radio DJ with a long history of success in both the hip hop and urban communities. Mr. Banks never mentioned Erik Kuselias, who had hosted this program since the series began in Daytona Beach in February. ESPN had apparently seen fit to make a change.

Today, without so much as a word about Mr. Banks, who appears to host the show but Erik Kuselias once again. Both Mr. Banks and Mr. Kuselias have referred to themselves individually as the "host" of this series, and both have press releases saying they are "the" series host. Viewers need either an explanation...or a scorecard.

Mr. Kuselias went right back to his sports talk radio form and tried to intimidate Chad Knaus in a harsh and non-smiling interview. Unfortunately for Mr. Kuselias, former radio hosts do not match up well with NASCAR championship crew chiefs, who make their living on pressure-packed decisions in a live event on national television. Kuselias went on to try and put Tim Brewer and DJ Copp, both expert analysts, on the spot as well. Neither one took the bait, and Kuselias was left frustrated once again. It seems he cannot imagine a sport where most folks cooperate, and there is very little anger and ugliness. Major League Baseball, this is not.

Kuselias was left with only veteran driver Jack Sprague as his final interview, and it was clear the wheels had come off Kuselias' interview train. Here are some wonderful samples:


Kuselias struggled through a ridiculous segment where drivers were somehow "picked" against each other in the next race simply because ESPN landed a sponsor for this feature. I guess this segment excludes things like cut tires, accidents, and mechanical failures. ESPN2 is off-track with the harsh sports talk mannerisms of Kuselias contrasting with the polite and charming manners of his NASCAR analysts and guests. As I have mentioned before, its like watching two completely detached groups come together for thirty minutes while they are forced to make a television show.