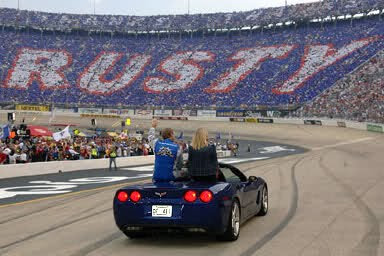 Darrell Waltrip is home on the couch sending out tweets. Sometimes, he makes videos on NASCAR topics in his home office. Where Waltrip is not these days is national television. Through the FOX races and then on SPEED's RaceDay show, Waltrip was NASCAR TV's lightning rod. Now, the torch has been passed.

Several years ago ESPN moved Rusty Wallace from the TV booth to the infield pit studio. Dale Jarrett had arrived and taken over the role of lead analyst. The move was a good one for Wallace.

In the controlled confines of the infield, Wallace could exhibit his passion for the sport and still get fired-up on topics while under the watchful eye of TV veteran and infield host Allen Bestwick. In this role, Wallace could offer instant reactions to topics within the races and still be part of the overall telecast.

The past several seasons have also seen Wallace continue to work in the TV booth as an analyst during the Nationwide Series portion of the ESPN season. These appearances occur on the weekends when Jarrett is on vacation or there is a standalone race away from the Sprint Cup Series venue.

Having an active Nationwide Series multi-car team owner in the TV booth as the lead analyst for a race in the same series has never been a good idea. ESPN has continually defended Wallace and recently extended his contract with the network until 2014.

Back in July of 2007 as Wallace announced his expansion to a two car Nationwide Series effort, he said that his contract with ESPN forbid him to be an owner in the Sprint Cup Series. Since his Nationwide (Busch) effort was already underway, it was permitted to continue.

It was in 2009 when ESPN vice president of motorsports Rich Feinberg spoke with reporter Jeff Gluck, who was then working at scenedaily.com, about the topic of Wallace on TV.

"We’re not trying to hide that Rusty is an owner," Feinberg said. "When you hear the guys talk with him about it costing him money, it’s quite the opposite. As long as we are up front with our viewers right from the beginning about their other interests and if in our opinion their commentary doesn’t have that bias, then we’re OK."

Feinberg told Gluck that Wallace's presence on the broadcasts benefits viewers to the point that it outweighs these issues which Feinberg referred to as "interests outside of their journalistic interests."

"Have there been times where there’s been an uncomfortable moment? If I’m being honest, I’d say yes," Feinberg said. "We talk about those and try to move on, but the key is not to hide it."

In closing with Gluck, Feinberg spoke about an issue that is now on the front burner. "The audience is the ultimate judge," Feinberg said. "The audience judges our work, our ethics and our credibility on a daily basis by whether they choose to watch us or not. That’s who we do this for."

Saturday night, Wallace found himself in the ESPN TV booth working the Nationwide Series race with Marty Reid and Ricky Craven. At Lucas Oil Raceway, the rumor was that payback was coming for Rusty's son Steven after some rough driving in the last race.

In the pre-race show, Rusty did his best to smooth things over sounding a lot more like a nervous owner than an analyst. Craven was not too sure that the hard feelings about the younger Wallace and his aggressive driving style had passed. It made for some interesting moments.

Wallace had already found himself on the hotseat this season several times after appearances in the TV booth. The most recent was Nashville, where his son was involved in on-track incidents with Jason Leffler, Joey Logano, Brian Scott and Elliott Sadler.

The night included a replay of Wallace hooking Leffler and spinning him out that was explained on the air by the senior Wallace as Leffler moving up on the track to cause the incident. Steven later admitted after the race he got frustrated and sent Leffler for a ride.

Saturday night, the younger Wallace failed to slow for an accident on the track and caused a red flag after demolishing his own car and hitting two others. The senior Wallace placed the blame on a tap from driver James Beuscher that ESPN conveniently showed several times in replay.

After the race the younger Wallace admitted to trying to slow down and locked up the brakes. He said it was just a racing deal. Once again, the comments from the driver just did not match what was offered on national TV by the analyst.

Monday on ESPN2's NASCAR Now, the elder Wallace was a panelist along with Jarrett on a show hosted by Bestwick. In a surreal moment, the video highlights of Saturday's Nationwide Series race were edited to make it appear as if the bump from Beuscher directly caused the Wallace accident.

ESPN even inserted a loud crunching sound over the video of the bump to make it seem as if Beuscher propelled Wallace directly into the other cars. To add insult to injury, Rusty was never asked about his son's accident that brought out a red flag or any other issues involving his driving.

This weekend the Nationwide Series heads to Iowa Speedway, a track that Wallace helped to design and in which he has an ownership stake. It's interesting that the ESPN announcer schedule released Monday shows Ricky Craven and Kenny Schrader working the race with Reid.

Wallace is scheduled for the infield studio in Pocono for the Sprint Cup Series weekend. In many ways, this may be perfect timing to get a little distance built up between Wallace, the Nationwide Series and the TV booth.