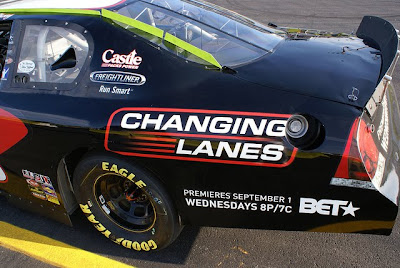 Update: Going to leave this post up to host your comments on the first episode of the show. Some folks put it on the DVR and will be watching it later. I liked the personalities of the kids and the fact that viewers got to see the parents. I did not like the choice of a voice-over announcer or the hyped drama of the heat races. I will be back next week and watch the next episode.

The NASCAR Media Group, BET network and former DEI president Max Seigel are partnering to bring a new series to TV. Changing Lanes is one of those infamous "docu-series" that allows producers to walk both sides of the street.

Part real story and part scripted competition, Changing Lanes is sure to be controversial to some. Click here to watch the official video preview.

Here is the basic premise from a recent press release:

The series kicks off at NASCAR's Drive for Diversity Combine where 30 drivers gather to showcase their on-track skills as well as their ability to conduct themselves professionally in various settings. Those that perform well continue in the competition, undergo further on- and off-track evaluations and subsequent eliminations until there are only four contestants remaining. The final group will join Revolution Racing and compete in the 2010 K&N Series as well as partake in a 50-lap head-to-head race. The winner will get the opportunity to qualify for the Toyota All-Star Showdown in Irwindale, CA.

Click here for a link to Dave Kallman of the Milwaukee Journal Sentinel discussing this ten episode series. Kallman makes several very good points. The mix between the real world and "docu-drama" content edited for TV might work well in entertainment, but motorsports is a bit different.

Over at commonsensemedia.org, the website gives the series high marks in several different categories. Click here to see the review. "The series offers positive messages and role models for tweens and up," says the article.

Meanwhile, over at The New York Post the Changing Lanes headline says "NASCAR: It's not just white guys." In yet another major market publication out of touch with the sport, the Post pushes the redneck stereotype while using Danica Patrick and Wendell Scott as the best NASCAR minority examples.

The rapper Ludacris, whose real name is Chris Bridges, provides the narration for Changing Lanes. Bridges is no stranger to media controversy and is certainly an curious choice. He has walked a fine line between mainstream media acceptance and public criticism for profanity, misogyny and racism in his song lyrics. Those critics have included Oprah Winfrey and President Barack Obama.

BET as the destination for this series is also interesting. SPEED sits as the de facto motorsports cable TV network right now and certainly could use some new Monday night NASCAR-related shows. There simply is not much of a cross-over between the current NASCAR TV partners and BET. That makes promotion in existing NASCAR programming for Changing Lanes tough to do.

Seigel had a rough ride in NASCAR after coming to DEI with lots of dreams and ambitions to integrate current music and entertainment celebrities into the sport through his personal connections in the industry. Now, those same connections have resulted in a reality-style TV series that will certainly open some eyes among the existing fan base.

The MaxSeigel.com website calls Seigel "one of the most influential executives in the entertainment and sports industries." This time, Seigel is walking in backed by an established production company in the NASCAR Media Group. His product is airing on a well-known TV network in BET and NASCAR has given him the official stamp of approval for his effort.

Changing Lanes is going to be a fascinating television experiment to watch. The series debuts Wednesday at 8PM Eastern/7PM Central Time on BET.

We welcome your comments on this topic. To add your opinion, just click on the comments button below. This is a family-friendly website, please keep that in mind when posting. Thanks for taking the time to stop by The Daly Planet.
Posted by Daly Planet Editor at 5:00 AM 24 comments: