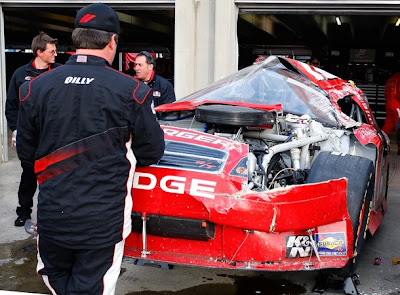 There have been stories published, radio interviews done and lots of TV shows produced since the Edwards vs. Keselowski incident Sunday at the Atlanta Motor Speedway. Tuesday, NASCAR announced the penalty for Edwards. As many predicted, Edwards was simply put on probation with no other sanctions.

Amid the debate about penalties, there seems to be something missing. TV viewers saw Carl Edwards speaking after the first incident early in the Atlanta race. Initially upset with Keselowski, Edwards changed moods quickly after being shown a replay of the incident. The TV screen told the tale.

These words were broadcast into millions of homes across the nation. "It looked like it wasn't as malicious as I thought," said Edwards on camera. "We both had a part in it and it’s not his fault," Edwards later added from the garage. When FOX viewers last saw Edwards, he had taken responsibility for his own involvement.

Eventually, the story of the race began to unfold. Topics like tire issues, Junior struggling and Montoya surging were the focus of the telecast. The normal scenario of crucial pitstops, tire decisions and race strategy was being played out. Goodyear seemed to be having a problem, but that was not the TV reality. There were other things being discussed.

Carl Edwards was not one of those other things. He was not even a blip on the TV radar. As a team running for points, it was assumed his car was being repaired in the garage. His story was not updated because the action on the track was outstanding.

Even after the NASCAR on FOX team gasped as one and then showed us pictures of the crumpled red car, Edwards was not in the scenario. It was only when the TV replays began that the true picture of what happened was revealed. The next time viewers heard from Edwards he was humming a very different tune.

"At the end of the day, Brad and I have had a lot of things go on," said Edwards to ESPN. "That was pretty wild. No one could have predicted that, but I think we probably won't have as many run-ins now as we have had in the past and that's a good thing. Both of us will probably be better off."

Edwards comments to FOX, ESPN and SPEED after the accident were repeated many times on NASCAR-related shows. His comments that he was partially to blame for the original incident were never repeated. The focus of the media, especially TV, was the accident and the aftermath.

So, what happened to Edwards between the time he took personal responsibility for the original accident and his return to the track? What happened that changed this person from someone almost embarrassed about the situation to an avenging angel representing personal justice?

No one seems to be able to fill in this time gap. Did Edwards become more and more enraged in his own motorhome? Did he meet with his crew chief and/or owner? Who or what were the influences that caused this dramatic and significant change? If this was a group decision, then maybe Jack Roush should speak up.

Asking the TV audience and NASCAR fans to believe that this was single-handedly an Edwards idea is ridiculous. Did his crew return to pit road to watch him take-out Keselowski? Did his crew chief return to the pit box? Did his spotter help him find the offending car on the track? The NASCAR Media Group seems to have audio from everyone behind the scenes. We will be hearing the Edwards team dial him in for the kill?

Tuesday evening on SPEED's Race Hub, Jeff Hammond offered the following into the mindset of Edwards.

"I talked to Carl about it," said Hammond. "He felt like Brad Keselowski had run into him four times, two of those times Brad went to Victory Lane. He said it needed to stop here at Atlanta and he went out and let Brad know that I'm done, it's over with now and we are even."

That certainly is not what Edwards told FOX and other TV outlets as he walked away after seeing the original accident. What really brought this All-American boy back to the track to end the top ten run of a Penske team with only a few laps left in the event? Rage? Politics? Public Relations?

Despite the fact that the penalty has been announced and most of the media have moved on, perhaps someday the truth about what really happened between the original incident and the payback heard around the world will be revealed.

TDP welcomes your comments on this topic. To add your opinion, just click on the comments button below. This is a family-friendly website, please keep that in mind when hosting. Thanks for taking the time to stop by The Daly Planet.
Posted by Daly Planet Editor at 12:10 AM 72 comments: