It's Auction Time On SPEED! 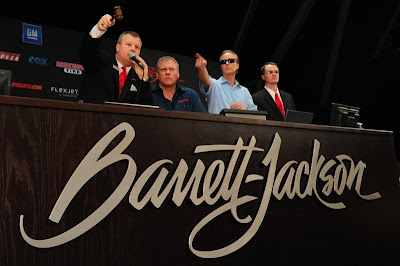 Friday features a clash of timeslots that will leave NASCAR fans talking. TV executives get put in tough spots sometimes and when push came to shove, this time NASCAR lost.

SPEED comes on the air at 2:30PM with a preview edition of NASCAR Live. John Roberts hosts with Randy Pemberton. Wendy Venturini and Hermie Sadler are the reporters.

Sprint Cup Series practice is next on SPEED at 3PM. Adam Alexander hosts with Darrell Waltrip and Jeff Hammond in the TV booth. Matt Yocum and Ralph Sheheen are the reporters.

At 4:30PM, SPEED closes out the NASCAR coverage with a final edition of NASCAR Live. Roberts, Pemberton and Venturini return this time joined by reporter Bob Dillner.

What follows at 5PM has been the subject of much discussion. SPEED has opted to tape delay the Sprint Cup Series road course qualifying from Infineon Raceway in favor of six live hours of another Barrett-Jackson auto auction.

This one is from Orange County, California. You can click here to see the cars that will be crossing the auction block. Less than spectacular is a nice way to sum it up.

The Cup Series qualifying begins at 6:30PM ET and it will be tape-delayed by SPEED until 11PM ET. That pushes NASCAR out of East Coast primetime and ends a long streak of SPEED presenting the best NASCAR practice and qualifying coverage on TV.

It will be Adam Alexander, Kyle Petty and Larry McReynolds calling the road course qualifying for SPEED. Handling the reporting duties will be Chris Neville and Marty Snider. There should be several interesting aspects to this delayed coverage.

Today, social media makes tape-delaying any kind of live sports programming meaningless. This will be the situation for SPEED. Across Facebook and Twitter, the qualifying results will be passed along by the teams, the sponsors and even NASCAR live as it happens.

None of the major NASCAR Internet websites will hold the information until the TV coverage hits the air. In today's world, the only thing that SPEED will have at 11PM on Saturday is upset fans. They have a reason to be, because there were options.

One would be to utilize the NASCAR.com website and stream live coverage of qualifying through the RaceBuddy application. Just like TNT will do for the race on Sunday, this simple Internet application is effective and can be seen on iPads, iPhones and on the Sprint Mobile app.

SPEED could certainly air the entire show at 11PM on delay as planned, but at least the live qualifying would have been made available online to fans as it happened. In the current scenario, trying to shut the TV door and pretend fans will tune-in late at night to see what they can easily find out happened hours earlier is ridiculous.

This TV scenario is made even more ironic because PRN radio will have live coverage of qualifying as well. With many of the PRN stations streaming online, it's not hard to find this coverage. Many veteran NASCAR fans already use the "I Heart Radio" app for cell phones to hear the local MRN and PRN affiliates.

Sure, it's just qualifying. Sure, there is a top 35 rule. Sure, there are all kinds of excuses and reasons to use for justifying the Barrett-Jackson coverage. It's the right of the network executives to make decisions they believe are in the best interest of SPEED.

Perhaps, FOX and SPEED executive David Hill picked a bad week to tell the national media that he wants six of the Sprint Cup Series races currently on FOX to move to SPEED eventually. His reasoning was simple. After all, SPEED is the home of NASCAR coverage. Right?