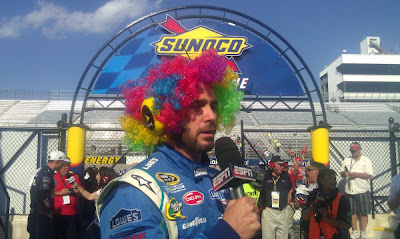 FOX produced the network's final Sprint Cup Series telecast of the 2012 season on Sunday afternoon from the Dover International Speedway. I recorded this race and will view it at a later time. This post is for your comments on the TV telecast.

Chris Myers hosted the pre-race show from the Hollywood Hotel. He was joined by Darrell and Michael Waltrip. After this weekend, Darrell will replace Kyle Petty on SPEED's RaceDay program for six races while Petty works for TNT as the lead analyst. Michael will continue as an analyst on the Camping World Truck Series telecasts, also on SPEED. Myers works the NFL for FOX when the season starts.

Jeff Hammond finished his first season as the roving reporter. Hammond was moved out of his longtime position by Michael Waltrip. The idea was to allow Hammond to move to locations in and around the tracks that the pit reporters could not access. He was also to focus on garage issues during the live races. Unofficially, Jeff Hammond will join Waltrip on the RaceDay program for the six TNT summer races.

Mike Joy hosted the telecast with Darrell Waltrip and Larry McReynolds in the TV booth. McReynolds will continue on the air with his role as infield analyst for TNT. Joy works the Barrett Jackson auctions for SPEED and will fill other select roles for the network in 2012.

The NASCAR on FOX pit reporters are Dick Berggren, Steve Byrnes, Krista Voda and Matt Yocum. Berggren's contract with FOX has ended and he will not be returning. Neither party has commented on who made the decision to end his duties. Byrnes will continue to host RaceHub on SPEED Monday through Thursday. Voda continues her hosting role on the Trackside program on SPEED. Yocum will work pit road on the TNT races.

Monday will begin a series of columns updating the new TV and social media features TNT will be bringing to the sport. In the meantime, please give us your final review of the NASCAR on FOX team for 2012. Thank you as always for taking the time to stop by The Daly Planet.
Posted by Daly Planet Editor at 12:00 AM 46 comments: