There Is A Blue Chevrolet Parked In The Taxi Lane 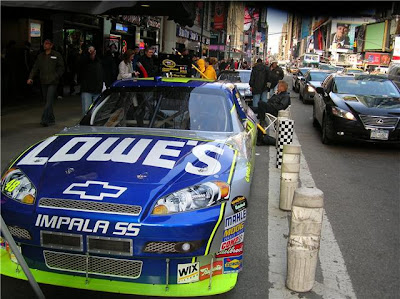 Would the owner of a blue Chevrolet please report to the front of the hotel and move your car. New York City wants to get back to the noise and chaos of a normal day in Manhattan.

After all the happenings of the regular season, it is time once again for the post-season Sprint Cup Series banquet. Friday night on the ESPN Classic TV Network NASCAR will be front-and-center from 9PM until Midnight.

Dr. Jerry Punch will be hosting the festivities and Matchbox Twenty is the musical guest. Comedian John Pinette will be along for the laughs and Kevin Costner will be providing a historical feature. For those fans who want to see the edited version of the three hour live program, that will air on December 8th from 2 to 4PM ET on ESPN2.

This is a very difficult time for the sport amid the struggles of the worldwide economy. The NASCAR revenue model for both the teams and the sanctioning body relies on sponsorship from major corporations who then get a high-profile return on their investments. That model is currently at a dead standstill.

Friday is going to be the last very public opportunity for NASCAR Chairman Brian France to infuse confidence in the teams, fans and sponsors. His appearance earlier this week at the Sports Media Summit found him speaking frankly about the economic decline even as he lamented the lack of excitement from Jimmie Johnson.

"He's a California guy, a very nice guy, a cool customer and obviously very talented," France said. "But he's not going to do a lot of things that are going to wow you or stun you or surprise you in the ways that sometimes other athletes make their mark. We need to do more with our athletes to bring out their emotions."

That last sentence is completely the opposite of the very public signal that NASCAR has been sending out on the TV airwaves for the last two years. Politically correct drivers like Carl Edwards, Jimmie Johnson and Jeff Gordon are the role models for the sport.

The last seventeen races of the Sprint Cup season feature six or seven ESPN announcers dressed in suits-and-ties talking about cookie-cutter drivers who get out and say the same thing after every race. The results have been a TV ratings disaster.

The anticipated surge in viewership once the sport put the final piece of the TV puzzle in place and transitioned over to ESPN and ABC did not happen. This bitter pill has been tough to swallow for France even as he presides over a billion-dollar TV rights contract that has years left to run.

This season ended with the tension between the NASCAR teams and ESPN at an all-time high. This relationship seems to be so very different than the one enjoyed by either Fox Sports or TNT during those portions of the Sprint Cup TV season. It is certainly very different than SPEED, the one network that distinguished itself this season.

While France publicly pointed to Jimmie Johnson and the economy, he may perhaps have missed one big issue. It is up to the NASCAR on ESPN team to close-out the year with a bang. That is the very reason the TV schedule is arranged in this manner.

Fox starts the season, builds the drama of the Daytona 500 and then stays on top of the stories as the season unfolds. TNT comes along and the focus is on the summer Daytona race and the "wide open" coverage. Both these pieces of the puzzle are just the prelude to the "big boys" coming to town.

While Kyra Sedgwick might be "The Closer" where TNT is concerned, it is the ESPN/ABC portion of the Sprint Cup TV package that is supposed to be "the closer" for the NASCAR season.

Rather than reflect on the fact that Jimmie Johnson is not Tony Stewart, France may be well-served with a strategic meeting to determine why the last two Sprint Cup seasons ended in disjointed TV coverage, flat ratings and angry drivers.

There may never be a more difficult NASCAR off-season in the modern era than this one. Despite the presence of additional family in the sport and professionals like Mike Helton at his side, ultimately the focus is on France to hold things together through this turmoil.

A clean and neat appearance with clearly-spoken enthusiastic words at the Sprint Cup Series banquet on Friday night is going to go a long way toward erasing the memory of the disheveled executive defending everything from sexual harassment lawsuits to the COT in 2008. This night, the spotlight is on Brian France.

Thanks to a TDP reader for the picture above from this week in NYC.

The Daly Planet will have a live forum for your comments during the Sprint Cup Series banquet. There will be a full column up shortly after the program is over to review how NASCAR and its TV company chose to present this awards program.

To add your comment to this post, just click on the COMMENTS button below and follow the easy instructions. The rules for posting are located on the right side of the main page. Thanks for taking the time to stop by The Daly Planet.
Posted by Daly Planet Editor at 6:30 PM 29 comments: 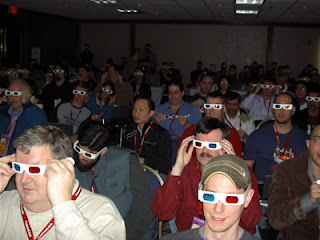 Fox Sports has a problem. In the world of sports TV contracts, Fox must match-up against an opponent that comes to the bargaining table with a major broadcast TV network and two cable TV sports networks in its pocket.

Should ESPN decide to turn the little-used ESPN Classic Network into a full-blown sports channel, that would give the company three national cable TV channels for live events in addition to the ABC Television Network.

When Fox senior executive David Hill looks around, he finds himself without even one cable TV network. Fox decided a while back to invest in the regional sports network business, which leaves Hill with nothing more than the sum total of the Fox local station affiliates and Rupert Murdoch's wallet with which to bargain.

After the recent news that the BCS was migrating to the ESPN/ABC group, Hill was looking for something to make Fox Sports stand-out in this era of new television technology. His solution? February's Daytona 500 shown in theaters in 3-D.

This from Michael Hiestand over at USA Today:

Fox Sports Chairman David Hill says Fox hopes to let theatergoers use 3-D glasses to watch February's NASCAR Daytona 500. Hill says sports in 3-D is "fabulous," and high-def TV "has just been a steppingstone" to get to 3-D.

Even if Fox's 3-D BCS action looks good — remember, this network created the NHL's "glowing puck" in the 1990s — you wonder if many fans will want to wear goofy 3-D glasses. Not to worry, Hill says: "Tommy Hilfiger will make 3-D glasses, and there'll be special 'date' glasses."

The funside of Hill is that he takes risks. He was behind the launch of Hot Pass on DirecTV and originally put together the NASCAR on Fox team that is the most visible and well-known of the NASCAR broadcasters.

An Aussie with a very long and colorful history in the TV business, Hill is Murdoch's right-hand man in American sports TV.

Before you think the 3-D talk is lunacy, take a look (click here) at this video from the guys at Philips. What the television set manufacturers are trying to do is eventually bring 3-D telecasts into the home in the same way that High Definition is cracking into the market.

Once again, this poses the biggest problem for program producers like Hill. Here are his comments on producing sports in 3-D in the future from USA Today:

"It's like that old Who song, Won't Get Fooled Again," Hill says. "Broadcasters had to pay through the nose to launch high def — we're still getting over the financial scars — and didn't get anything back in ratings or ad sales."

So while the BCS on the big screen might serve as an appetizer, he says networks aren't going to underwrite the infrastructure to let millions of couch potatoes see more fully dimensional views of fair catches: "Broadcasters won't do anything until we get everything paid for by the set manufacturers."

Speaking over at Variety, Hill was a bit more blunt in his assessment of the situation:

"I hope the TV industry doesn't get conned again the way we did with HD," Hill said. "And we got conned. It cost us a fortune to go to HD, but do we get a penny more from the advertisers? Do we get an extra rating point? No. Everybody benefited but the broadcasters."

"I can't see us making a move into 3-D until a good fairy comes flapping into my office with a check," he said. "But still, it's sitting there, we know it's going to work, and some day someone is going to do something."

In the meantime, you may be sitting in your local theater wearing the blue and red glasses while the COT crowd battles it out in February. There is no real timetable for any or all of this to happen, but one thing is for sure. There are 73 more days until the Daytona 500.

The Daly Planet welcomes comments from readers. Just click on the COMMENTS button below and follow the easy instructions. The rules for posting are located on the right side of the main page. Thanks for taking the time to stop by in the off-season.
Posted by Daly Planet Editor at 4:00 AM 24 comments: