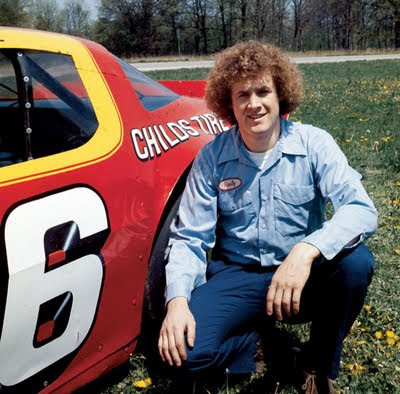 Marty Reid was available after ESPN reduced the number of IRL races the network would carry. Reid came in and immediately set a tone of excitement and good humor during the past several races. It was Rusty Wallace, who owns a Nationwide Series multi-car team and Randy LaJoie, a former Nationwide Series champ who joined Reid for those telecasts. That is one of the more infamous pictures of the early Wallace hairdo that fans love to see pictured above.

This trio clicked immediately and the results were fun to watch. LaJoie just loves poking fun at Wallace on the air and Wallace is thick-skinned enough to take it. Whether it was Steven Wallace spinning out the leader under caution or coining "Rusty bumps" as the term for the Iowa Speedway track divots, LaJoie was having fun on TV.

Wallace may not be the most articulate guy, but Reid and LaJoie brought his outspoken side to the surface and Wallace jumped right in with his opinions and analysis of the racing action. Once banished to the Sprint Cup infield after one season as lead analyst, Wallace provided exactly what viewers needed to hear on these telecasts. Strong opinions that make the Nationwide Series interesting again.

This weekend, the Sprint Cup and Nationwide Series races are together in Watkins Glen. While Reid will continue to call the action for practice, qualifying and the race it will be Dale Jarrett and Andy Petree alongside him in the TV booth. Wallace once again will be downstairs in the ESPN Pit Studio with Allen Bestwick and Brad Daugherty. LaJoie will be in the ESPN studios on Monday for NASCAR Now.

What a shame that ESPN did not decide to keep the dynamic of Reid, Wallace and LaJoie together. Jarrett and Petree are focused on the Sprint Cup Series and rightly so at this time of the season. Perhaps, this is something that could be considered for 2010.

Reid will have another opportunity to make a Nationwide Series event something that can attract fans on its own merit. From the start, Reid broke a lot of ESPN rules. He does not play the "Kyle and Carl" card, he mentions almost every start-and-park car on the lap they "break down" and he puts the Nationwide regulars front and center continuously during the race telecasts.

ESPN President George Bodenheimer originally declared the Nationwide Series as "a diamond in the rough" of the larger NASCAR TV contract. For the past two seasons, that diamond has been neglected while the glow of the Sprint Cup Series drivers attracted almost all of ESPN's efforts.

Now, there is an opportunity to change all that and the momentum is building. Reid and company start with final practice Friday at 5:30PM ET. They return for qualifying on Saturday at 10AM. Then, Bestwick opens with the pre-race later on Saturday at 2:30PM and the green flag falls shortly after 3PM. All of the coverage is on ESPN2. Reid may be the best thing that has happened to the Nationwide Series in a long time. TDP will live blog the race on Saturday.

In the meantime, please feel free to offer comments on the topics in this column. To add your opinion, just click on the comments button below. This is a family-friendly website, please keep that in mind when posting. Thanks for taking the time to stop by The Daly Planet.
Posted by Daly Planet Editor at 8:30 PM 19 comments: 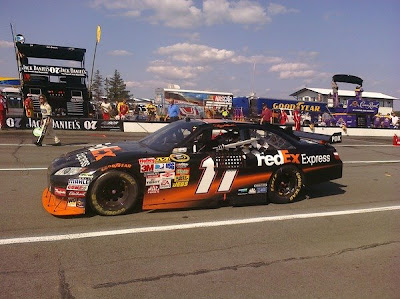 "You guys always take things the wrong way," said Juan Pablo Montoya to ESPN Pit Reporter Vince Welch. "I am very impressed with you." The look of sarcasm and disgust on Montoya's face made a statement.

That driver had just run 500 miles and battled back through adversity to almost win a Sprint Cup Series race. After a second place finish, he paused to speak with the TV network telecasting the event. The reporter's agenda was controversy. This has been a question that has dogged ESPN since the network returned to NASCAR. What is ESPN's true NASCAR agenda?

Thankfully, ESPN's disappointing efforts at both Pocono and Iowa this weekend were overshadowed by the action on the track and the emerging storylines within the sport. Rusty Wallace packed over fifty thousand people into Iowa Speedway to watch Brad Keselowski beat Kyle Busch to the finish. In Pocono, a motivated Denny Hamlin drove to a popular victory and then let his real emotions flow in Victory Lane.

It was Marty Reid leading Wallace and Randy LaJoie through the Iowa telecast on Saturday. Reid has really been great for Wallace and brought out the best in this NASCAR veteran. Wallace is a handful, but between Reid keeping him in line and LaJoie making fun of him, this energetic team has been great for the Nationwide Series.

Unfortunately, ESPN chose this weekend to change the NASCAR coverage significantly. For whatever reason, both Iowa and Pocono suffered tremendously from poor choices by the ESPN Director. One fan emailed: "I found myself screaming at the TV to switch to a track view, not in-car, during the action. Who controls this during the race?"

The answer is the Director. The Producer tells the story and the Director selects what pictures are going to be shown to the fans as the finished program. On this weekend, the directing was simply brutal. Instead of showing wideshots of the Iowa fans and then slowly zooming-in as the field raced by, the Iowa race resembled a video game.

Tight shots of seemingly random cars were mixed with endless in-car camera views. It was as if the Director had just discovered this technology. NASCAR fans have been watching racing since February, this is August. Perhaps, they have already grasped the concept that those cameras are actually in the cars.

The problem with simply cutting between tight shots and in-cars is that fans watching at home completely lose any perspective of the field, the track or the race. ESPN accomplished this feat on both the Iowa and Pocono races over-and-over again.

Here are two viewer comments from the Iowa telecast:

Man, what a shame the Director is ruining this. All tight shots and missed every caution. I'm in complete agreement, there seems to be racing happening but we're stuck with these close shots. When I rule the world, I will mandate that ALL in-car cameras be destroyed. There will be no exceptions.

Today is a perfect example of why I tell skeptical fans that TV is nothing like being there. It only takes 1 person in the TV truck not on their game to ruin a good race for TV audiences.

In Pocono, Dale Jarrett handled the vast majority of the play-by-play duties with Andy Petree working very well as an analyst. More and more it seems that Jerry Punch can only add statistics, state facts and ask questions. This was Dale Jarrett's day and without the Infield Pit Studio or Tech Center, Jarrett carried the load.

Even Jarrett's polite manners on the air could not hide the fact that the TV truck was struggling to figure out what to show viewers. Fans used Twitter, email and The Daly Planet website to make it known they wanted to see racing, not the hoods of random cars and tight shots of the Hendrick Motorsports drivers.

They sure missed a lot of passing just now. They would let you see some of it in the back ground but would go to a tight shot and you lost the view.

Punch is hosting, not announcing. Question is, is that what ESPN wants him to do?

What is the obsession with the incars on the restarts? The most exciting part and they have to mess it up.

I'm convinced they (ESPN) are trying to get out of their contract, trying to drive us insane...or both!

I just got my cable fixed for *this*? No excitement in the broadcast, cautions called without emotion, passing barely noticed by the announcers or the cameramen? Bad, bad, bad.

There is no doubt that ESPN could take a quick look at the TNT coverage from this summer or even some older classic NASCAR races produced by ESPN to get a very different perspective on how to frame a race for TV. The question is, who steps up and says this is not working?

Monday afternoon, Allen Bestwick led his NASCAR Now panel through an outstanding hour of conversation about the Pocono, Iowa and Nashville races. This came on the heels of Bestwick hosting almost four hours of live rain delay programming from Pocono without missing a beat. In the studio and before the race, ESPN is presenting some of the best NASCAR programming in recent memory.

It seems that only the live event coverage is having an identity crisis, which leads back to the big question. Why is ESPN in NASCAR? If the network made this multi-year commitment to be a part of this sport, what has gone wrong? Other than Digger, Fox clicked through their races without any big issues and TNT put on a great show.

Why should fans walk away frustrated with the TV coverage of their favorite sport when ESPN is producing it? One fan emailed that he left the ESPN coverage, went to his car in the driveway and listened to the radio coverage.

Would this sort of problem happen for an ESPN college football game? A Major League Baseball game? A college basketball game? If not, then why is it happening with NASCAR races on ESPN?

It's time to right this ship and get things changed. College and pro football are the biggest challenges to the NASCAR on ESPN telecasts and both of those sports are weeks away from starting.

To keep the remaining NASCAR viewers, it may well be time to learn from the past and simply show the cars on the track without the gimmicks, the gizmos and the zoom lenses.

You can help this discussion with your comments. To add your TV-related opinion, just click on the comments button below. We do not want your email and there is nothing to join. We simply want your comments on the Iowa and Pocono telecasts.

Update: We have some outstanding comments from NASCAR fans nationwide on this post. Please take a moment to review them after you have read the article. Amazing passion for NASCAR and knowledge of the sport.

This is a family-friendly website, please keep that in mind when posting. Thank you for taking the time to stop by The Daly Planet.
Posted by Daly Planet Editor at 12:01 AM 85 comments: