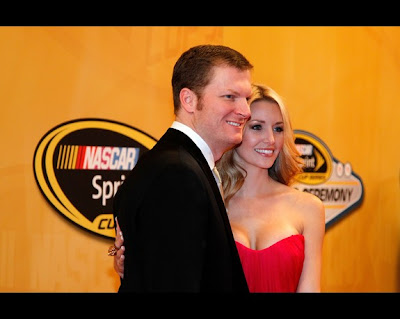 You may remember Dale Earnhardt Jr. and his girlfriend from their appearance at last season's Sprint Cup Series banquet. There they are via our friends at Getty Images.

On Wednesday, Sirius Speedway's Dave Moody used his blog and radio program to make fans aware of a National Enquirer story that Junior was supposedly put on the spot to get married in the off-season or instantly become a single man. A short time later, Sirius NASCAR morning host Pete Pistone posted at CBSSports.com that Junior denied "the report" and was concentrating on the Chase.

All of this nonsense came as part of a total NASCAR marketing effort involving everything from Denny Hamlin talking about wild Lake Norman NASCAR parties on the Dan Patrick show to a Google search for "Jeff Gordon's moustache" returning 219 active news stories on that crucial topic.

The Chase drivers scattered across the country in the annual effort to try and divert some attention from the National Football League. As you may remember, the Chase was created by NASCAR Chairman Brian France as a playoff system to try and create more interest in NASCAR during the NFL season.

Earnhardt's appearance at ESPN this week allowed him to appear on various TV shows, only one of which was devoted to NASCAR. That program aired once at 3:30PM Eastern Time. It spoke volumes that Earnhardt's best appearance of the day was on a very popular show dedicated to the NFL. It was about the Redskins and RG3, not Hendrick and Chevrolets, during Junior's time at "the mothership."

The NASCAR marketing types called this week's media blitz "The Chase Across America." It certainly was an interesting exercise. Perhaps some of you who saw the various drivers featured on local news stations across the country could relate how they were featured and in what activities they participated.

This season NASCAR has totally shifted to a marketing-driven agenda and made great efforts to control any and all news about the sport. That may be one of the reasons for the heightened tensions between some of the Sprint Cup Series drivers and the media. Jeff Burton was recently outspoken on SPEED's "Race Hub" show about the media not helping the sport and only focusing on negative issues.

This pro-NASCAR theme is prevalent on many TV shows, including the ones seen on SPEED and produced by NASCAR Productions from the tracks. In the new world order, NASCAR's marketing arm directly controls more and more media content about the sport. As Burton mentioned, the traditional media is said to be the enemy. This allows objective reporting and informed opinion to be called-out as the reason for problems with the sport itself.

In the system currently being used called "Integrated Marketing Communications," the centerpiece is the elimination of traditional media (reporters) and the installation of a delivery system that allows NASCAR itself to control the media content about the sport. There is simply nothing made available for reporters to cover that is not coordinated well in advance.

Many of you have asked about the lack of rumors and gossip on the Jayski site, about the endless repetition of themes by reporters from different media companies and even the fact that the post-race press conferences have become the topic of much more media coverage. It's all about control and this season NASCAR has exerted it in virtually every area of the media coverage of the sport.

The flipside of all this control is that NASCAR fans are outspoken, independent and don't particularly like being told what to think, say or do. It's one thing to stand in line for an autograph, but it's quite another to hear endless happy talk about the sport coming through very clearly from various radio and TV outlets.

In a media environment where NASCAR is facing-off with pro football, the idea that controlling the message instead of just letting things happen and then be reported is a tough sell. In this Chase interviews are arranged, talking points are provided and the entire atmosphere smacks of a public relations festival.

The TV promo's and ticket ads may continue to show wrecks and promote tough men behind the wheel, but the reality is that this Chase is a fully-controlled marketing-driven exercise where the drivers do what they are told and the media is just along for the ride.

Jeff Gordon's moustache may not be what veteran reporters want to write about, but when the choice that day is facial hair or nothing the result is exactly what Integrated Marketing Communications was supposed to accomplish. As Janet Jackson once said, it's all about control and NASCAR has plenty of it.

We invite your opinion on this topic. Comments may be moderated prior to posting.
Posted by Daly Planet Editor at 7:00 AM 35 comments: