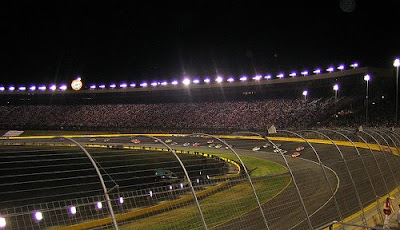 SPEED put on a brave face Friday as the network continued with on-track action from 9AM until almost 11PM. For TV viewers, SPEED's efforts were outstanding.

Unfortunately, one thing was also easy to see throughout the coverage. It seemed as if there was no one there. The grandstands at Lowe's Motor Speedway are huge, and vast sections of them were purposefully closed for this Friday program.

It was the main grandstand along the dogleg in the frontstretch that served as the focal point of the TV cameras when "fans in the stands" needed to be shown. Like several other tracks, Lowe's has the multi-colored seats that appear to the TV cameras to be occupied when in fact they are not.

On this day, no fancy illusions or very tight camera shots could hide the fact that even for All-Star qualifying and the Craftsman Truck Series, the fans just were not there. Hardcore racing fans may have seen the Summer Shootout Series telecasts over the years as the Legends cars and other series take to the small oval built into the frontstretch and along pit road. This looked like a Shootout crowd.

As the Craftsman Trucks put on a great show, the SPEED crew tried very hard to keep the cameras off the grandstands. When the TV requirements needed a wideshot, it was almost startling to see the infield appear to be more populated than the available grandstand seating.

SPEED also originated other programs from the SPEED Stage outside the track, and things appeared to be rather thin in terms of crowd numbers even for popular shows like Trackside.

The reality of a Friday schedule no doubt played a role, but this race "weekend" is supposed to be a destination that people visit as a part of an overall experience. Instead, it appears that many fans will simply attend the Saturday feature race and nothing else.

All eyes will be on the number of fans who come out for the All-Star race on Saturday night. Only a short time later, the Speedway executives are counting on exactly these same fans to return for the Coke 600 on the big holiday weekend.

As SPEED once again goes it alone on Saturday, the network may be dealing with another NASCAR reality of 2008. The eyes of the TV viewers will certainly be looking to see how many fans paid-up to be in the stands for this non-points race.

The Daly Planet welcomes comments from readers. Simply click on the COMMENTS button below and follow the easy directions. The rules for posting are on the right side of the main page. Thanks for taking the time to stop by.
Posted by Daly Planet Editor at 11:36 PM 22 comments:

The featured event of Friday at Lowe's Motor Speedway will be the Craftsman Truck Series race.

Krista Voda returns to the Truck Series when she hosts The Set-Up at 7:30PM. This thirty minute show features Voda and the two series pit reporters, Ray Dunlap and Adam Alexander. Voda presents a pre-race show that is almost the exact opposite of The Hollywood Hotel.

She talks with the team members, owners and drivers in this series as though they are friends or even family members. The tone she single-handedly set for this show has made the Truck Series one of the most TV viewer-friendly in NASCAR.

At 8PM, she hands-off to Rick Allen who will call the action in the race. Allen will be joined by veteran Phil Parsons and Michael Waltrip in the booth. Dunlap and Alexander will continue their pit road reporting duties.

The Truck Series on SPEED is presented in a very simple style. The production team concentrates on the racing, and allows the stories to play-out naturally in the event. The graphic package looks very familiar, but everything else about this telecast is produced by SPEED.

The Trucks should put on a good show, with the battle between the Cup Series regulars who are entered in this race raging with full-time Truck Series competitors like Ron Hornaday and Jack Sprague.

This post will serve to host your comments about The Set-Up and Craftsman Truck Series race on SPEED. To add your opinion, just click on the COMMENTS button below and follow the easy instructions. The rules for posting are on the right side of the main page. Thank you for taking the time to stop by.
Posted by Daly Planet Editor at 6:54 PM 43 comments: