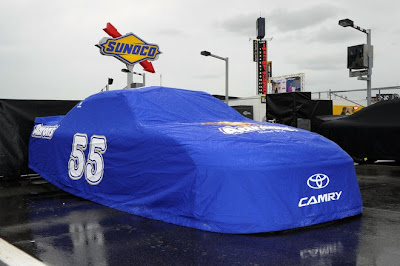 Live race chat is once again on Twitter.com using the #TDP1 hashtag. You can easily sign-up and participate. It's free and easy to use, please join us.

Update 12:50PM: RaceHub on SPEED at 6PM will serve as the Daytona 500 pre-race show. Full updates from the NASCAR on FOX team at the track as well as SPEED analysts in-house.

Update 12:30PM: FOX PR spokesman Dan Bell has confirmed that every local FOX affilate nationwide will carry the Daytona 500 live. That is huge, especially for West Coast viewers on a Monday at 4PM local time.

Update 10:15AM: NASCAR has announced that due to continuing rain, the Daytona 500 will be run at 7PM ET Monday and televised live on the FOX Broadcast Network. It was raining in Daytona at 9AM with jet dryers shut down and the track wet. Forecast is for daytime rain with clearing after 3PM. Will update track drying efforts and potential for 7PM start on this page. Thanks for your patience.

It was a valiant effort, but no amount of positive spin from the NASCAR on FOX gang could defeat Mother Nature. From the opening weather forecast that predicted possible light rain but no problems getting the race in to the subsequent five hours of rain fill, the Daytona 500 was not to be.

Here is the reset information for fans about Monday's TV and radio coverage:

FOX is scheduled to come on the air at noon ET and if the track is ready the green flag will be dropped by WWE star John Cena only minutes later. There is no pre-race show on either FOX or SPEED. There is also no flyover.

RaceBuddy or any type of video streaming is not done with the NASCAR on FOX race package. The network pays top dollar to have viewers watch FOX and that buys them what is called "exclusivity." As far as video is concerned in the US, it's FOX or nothing.

As of midnight Sunday, SPEED stated that network has no plans to re-air the race Monday night if it is completed on Monday afternoon. An email to FOX went unanswered, but it is highly unlikely that the Monday primetime line-up would be set aside for a replay of the Daytona 500 on the FOX Broadcast Network.

Basically, this means set the DVR, VCR or whatever recording device you may have available for all day Monday from noon until you get home from work. Right now, the only scheduled re-air is later in the week at noon on SPEED. Why these two sister networks could not agree on this issue as of Sunday night is anyone's guess.

For our friends in Canada, TSN2 will have coverage should the race get underway at noon. UK fans the word is Premier Sports will carry the race live when it happens on Monday. For those of you down under SPEED Australia will carry it live.

On the radio side, click here for a direct link to the Motor Racing Network (MRN) homepage. In an agreement reached only a short while ago, MRN can now stream races online through the MRN website in addition to using the normal radio affiliates nationwide. On Monday, there will be direct links for fans to use either the website page or the MRN mobile page to stream the race.

For those with android phones who want to use an app, click here for the I Heart Radio homepage. This provides feeds of local radio stations nationwide and there are several MRN affiliates on the list. You can scroll down on that page for a list of apps easily installed on your phone.

iPhone users it has been recommended that the TuneIn Radio app, click here for the link, is easily installed and is free. That will allow access to the same MRN affiliates for coverage of the race. The list of MRN stations is right on the MRN homepage.

As always, the SiriusXM NASCAR channel will carry the race live. SiriusXM has a live stream, but it is not allowed to carry any NASCAR content. To hear the Daytona 500 on SiriusXM, you must listen using your auto or mobile receiver.

After the race, SPEED will offer RaceHub at 6PM anchored by Danielle Trotta. She will have multiple reporters updating the stories from Daytona. ESPN will be using SportsCenter and ESPNEWS for post-race content.

We will once again be running a live stream on Twitter for TV comments on the coverage. Enter the #TDP1 hashtag into the Twitter search box to see all the comments in our stream display in real time. Please join us, Twitter is free and loaded with information.

Once the race is over, there will be a new post up right here for your post-race comments on the NASCAR on FOX coverage. Please take a moment to stop by and give us your wrap-up of the telecast. Thanks again for hanging in there, let's hope we have Monday racing at Daytona.