Kenny Schrader's Toe Back In The TV Water 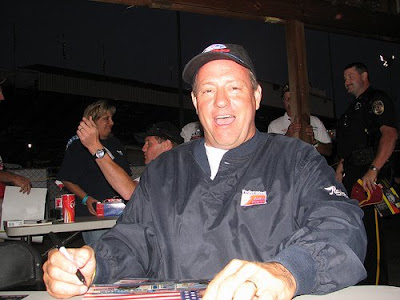 When the Inside Sprint Cup Racing show was cancelled, SPEED launched a new version of the Monday TV series and called it This Week In NASCAR.

While older fans may remember Eli Gold hosting a show of the same name on the now defunct Prime Network, the new SPEED show looked rather familiar.

Host Steve Byrnes used the same studio and sat across from a panel that was once again anchored by Michael Waltrip. One thing, however, was very different. Kenny Schrader was gone. Although he continued to be involved with the ARCA race telecasts, his colorful personality was missing from Monday nights on SPEED.

It was the dry wit and experience of Schrader that provided a balance on the Monday show for many years. Whether it was Michael Waltrip acting-up, Brian Vickers talking over his head or Dave Despain just being grumpy, a well-placed word or two from Schrader could restore order quickly.

Shortly after the new series was launched, TDP lamented Schrader's lack of involvement. Click here to read that column and the comments. We were told Schrader was pretty much done with TV and off to race regionally and concentrate on his ownership of several properties. Well, that was then and this is now.

Once again this Sunday, Dave Despain welcomed Schrader to the Wind Tunnel show. It was not as a guest, but as a network analyst. Schrader has been popping-up on Wind Tunnel and The SPEED Report on a semi-regular basis.

The Sunday interview was with Denny Hamlin and Despain stepped aside several times to let Schrader ask questions. Without a doubt, the same vibe was in the air as Schrader kept the conversation light but focused on key issues. He drew the best responses of the evening from Hamlin.

All of this leads to a single question. Will we be seeing Schrader reprise his role and step into This Week In NASCAR on Monday nights? This week, all three of the current panelists will be on a special All-Star program taped at the SPEED studios in front of a live audience.

The regular episodes feature only two panelists, with Greg Biffle and Chad Knaus rotating in the second seat. This leaves Byrnes to often deal with two very different opinions and not the type of spontaneous conversation that made the original program click.

Fans know that ESPN has discovered this secret on the Monday version of NASCAR Now. After struggling in the original format, the one hour program was changed into a discussion with three panelists and a host. Success quickly followed.

Perhaps, the second half of the season might bring an appearance or two by Schrader on This Week In NASCAR . It might be interesting to see how that dynamic would play out with Byrnes and company. Schrader's unique perspective may be just what the program needs to move it to the next level.

As they say, sometimes everything old is new again.

TDP welcomes comments from readers. Just click on the comments button below to add your opinion on this topic. This is family-friendly website, please keep that in mind when posting.

Thanks for taking the time to stop by The Daly Planet.
Posted by Daly Planet Editor at 10:30 PM 15 comments: