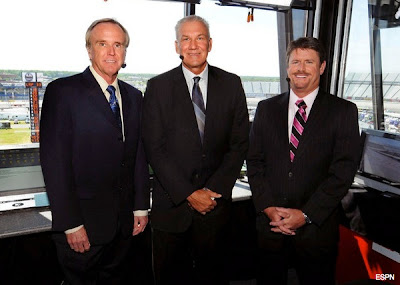 Lots of items coming across the TDP desk this week. Here are a few:

ESPN held its annual pre-Sprint Cup Series coverage conference call. We already know it's Marty Reid, Dale Jarret and Andy Petree calling the races. Other than that, there were two very interesting points where TV is concerned. The first is how ESPN is reacting to criticism of post-race issues with the NASCAR TV partners.

Question: Julie, there's been a lot of complaints this year by fans and others about the coverage from TNT and FOX. Does ESPN pay attention to that at all and do you adjust your broadcast accordingly?

Sobieski: We always pay attention to anything the fans have to say. If we feel that what they're talking about at any given point is relative to our coverage and things we can do better, we always learn from that.

One great example this year of something we've been hearing not just this year but in other years is that fans want a more in‑depth post race experience around the races.

That is definitely in response not only to what we've heard from fans, but it is just an opportunity that we're able to provide on ESPN with the schedule and earlier start times as well.

Pretty good answer to that issue, use SportsCenter to host a post-race show. Here is the second topic, ESPN choosing to have it's own "expert" on every post-race show.

Question: Julie, you mentioned earlier about the post‑race show. Weren't you pretty much cutting into SportsCenter and doing the same things last year? Or what is more expanded that you're providing in regards to the post race program?

Sobieski: In some cases that's an hour and 90 minutes to close to three hours on the back end of these telecasts. Having that much time affords us the opportunity to consistently go back to the racetrack and spend time there. We have production that's been working on a list of several specific features and components that we expect to see across SportsCenter that fans can get used to. Carl Edwards being one of the components as a standing guest after each one of our ESPN telecasts.

That's right, starting this weekend in Indy it will be Carl Edwards as ESPN's post-race driver/analyst. You just can't make this stuff up.

Also this week SPEED informed us that Darrell Waltrip is indeed returning to the network as we suggested several weeks ago. Waltrip will replace Elliott Sadler on Trackside and will join John Roberts, Kyle Petty and Kenny Wallace on the SPEED Stage for RaceDay this weekend in Indy.

FOX executive David Hill is now in charge of SPEED and it's pretty clear that DW is the man where Hill is concerned. Expect Waltrip's TV presence to continue and even grow as the season progresses.

Back in the studio, SPEED's Race Hub continues to offer some interesting guests. Wednesday, Jeff Gordon is featured. Thursday brings Penske Racing VP Tim Cindric to review the Gateway situation, which may include penalties announced on Wednesday. Also, truck series director Wayne Auton will be on to make an official announcement about the series.

If you are scheduling TV plans for this weekend, the entire NASCAR TV schedule is listed on the left side of the TDP main page. One show to note is a one-hour NASCAR Now special hosted by Allen Bestwick from Indy on Thursday at 5PM ET. Finally, the one hour Sunday night recap version of NASCAR Now also returns this weekend at 10PM ET.

If any additional information comes along, we will add it to this post. In the meantime, happy to have your comments on these topics. To add your opinion, just click on the comments button below. This is a family-friendly website, please keep that in mind when posting. Thanks for stopping by.
Posted by Daly Planet Editor at 12:15 AM 53 comments: