Costumes Cause Controversy? It's Halloween! 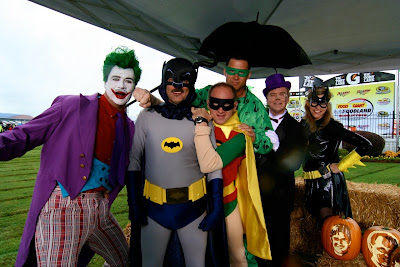 Going to expand this post and open up the comments section. So far, two websites have posted rather scathing reviews of the Halloween fun.

Here is Matt McLaughlin from Frontstretch.com on the CWTS crew:

There have been some badly ill-considered moments in NASCAR broadcasting history. Few of them were as badly conceived, darkly disturbing, or clearly hallucinogenic-ally inspired as the Batman themed pre-race show prior to Saturday’s truck series race. If only that sort of effort, talent and pre-production had been devoted to something useful, SPEED might really have been onto something other than ensuring Krista Voda can never show her face in public without shame again. Two words Ms. Voda, “Thigh-master.”

This is the quote from Michael Knight at the spindoctor500.com blog:

Those who appeared on-air in costume last weekend lost credibility and gave away the honored title of journalist. I now consider them to be actors who dress-up and play a part. They should now be disqualified from membership in any professional journalists' organization.

While McLaughlin limited his comments to the CWTS crew, his swipe at TV veteran Krista Voda made me read it twice. Knight aimed his comments at the CWTS and Trackside folks. Trackside actually scheduled a special Halloween version on Saturday night that featured fun, costumes and lots of fans.

Update: Although Trackside did feature a Halloween episode on Saturday night, Mr. Knight has pointed out that he also saw the CWTS pre-race show and based his comments on that single program.

What is your opinion? Were you in the Halloween spirit or should these folks step aside and leave the costumes for the fans in the infield?

To leave us a comment on this topic, just click the comments button below. This is a family-friendly website, please keep that in mind when posting. Thanks for taking the time to stop by.
Posted by Daly Planet Editor at 5:00 PM 118 comments: