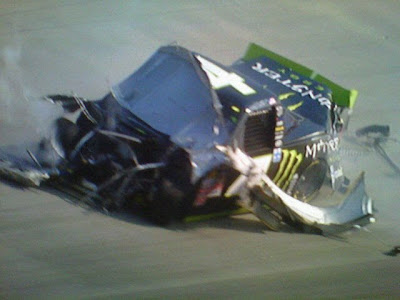 Apologies for no new blog posts recently, Google hosts this site and had some troubles. All is supposed to be well and we carry on!

The truck race from Dover was run at 4:45PM this afternoon in Dover. SPEED and NASCAR always delay it until tonight. Those folks who want to know the results can certainly check any NASCAR website, Twitter or Facebook. There are no more surprises in our world of information and communication.

The sneak peek above is from our friend producer John Morris who wanted everyone who heard about a hard crash by Ricky Carmichael to know he was OK. That does not look like a fun ride.

Krista Voda starts with The Setup, a show that features pit reporters Ray Dunlap and Hermie Sadler. Rick Allen is in the booth to call the action with Phil Parsons and Michael Waltrip.

Dover is a tough track for this series as lap trucks begin to be a problem very quickly. In the past, a handful of trucks were in a class of their own and made it a race within a race. Many of the competitors were at Dover for experience rather than to race for the win.

SPEED's classic style of truck series production has been solid for years. Sticking to the story of the race, featuring the actual racing on camera and working to keep the excitement going has been something fans have come to know very well.

Just like last year, the truck field is thin. While there are some good stories, there are certainly a lot of folks who are just no there for the right reasons. Allen has been up front in his decision to avoid talking about just how many truck teams are starting and parking but the ticker on the screen ultimately tells the tale.

This race always looks a little weird on TV because it is daytime on the screen and nighttime for most of the East and Central US. That's only one of the issues associated with trying to keep things under wrap these days.

This post will serve to host your comments on the truck series coverage from SPEED. To add your TV-related opinion, just click on the comments button below. This is a fan friendly website, please keep that in mind when posting. Thanks for stopping by.