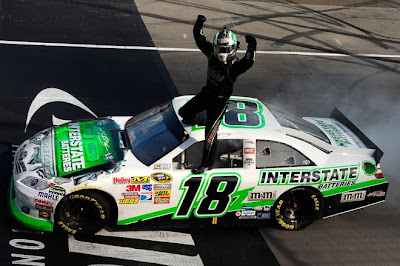 Rain was a worry, but luckily the weather stayed good and the ESPN coverage of the Sprint Cup Series race from MIS went off without a hitch.

Nicole Briscoe hosted the coverage from the Infield Pit Studio. Rusty Wallace and Brad Daugherty were the analysts who joined her. ESPN college football analyst Desmond Howard stopped by after giving the command to start engines. The college football talk was interrupted by racing.

Allen Bestwick, Dale Jarrett and Andy Petree handled the race from the TV booth. This was an MIS script that all three of them knew very well. Bestwick did his best to concentrate on keeping viewers up to date on who was where and why.

Jarrett and Petree were again saddled with a fuel mileage and track position event without major incidents except for engine woes. Both of them understood the issues and talked clearly about what teams could make what decisions to keep themselves in contention. You just had the feeling for them it was a long day.

Speaking of long days, the ESPN pit road reporters were struggling for some reason. It's a big track and there were several caution periods that made for group stops, but it was still a rough race. The booth dominated the commentary and there were almost no crew chief interviews, unlike the last race.

Tim Brewer has now been upstaged in the pre-race show by ESPN's own Sports Science features that have now been adapted to NASCAR. This really steals Brewer's thunder and makes his subsequent reports seem rather basic.

ESPN made good pictures and sound. The director crept back toward his tendency to frame camera shots tight and lose the larger perspective. On a big track like MIS, that was tough. ESPN has a good split-screen effect, but it was rarely used for green flag racing.

In the end, NASCAR may have been guilty of providing some early cautions for minor debris and was rewarded with a late caution that bunched the field for the finish. It was a storyline that TV viewers had seen before.

This post will serve to host your comments on the ESPN coverage of the Sprint Cup Series race from MIS. To add your opinion, just click on the comments button below.