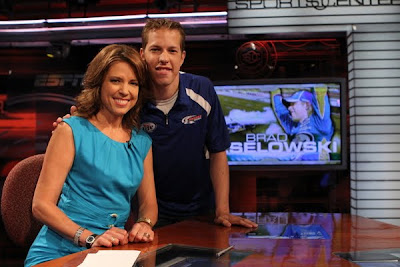 There will be lots of TV coverage from Homestead and beyond before the Camping World Trucks race on Friday night. The full TV schedule is on the left side of this page.

Latest news is that Brad Keselowski was fined 25K by NASCAR for his comments about the new Electronic Fuel Injection (EFI) system being developed for Sprint Cup Series cars. Keselowski's opinion was that the entire thing was a sham promotion and not effective in changing the sport in any way other than increased cost to teams.

"We made it clear to him that these kind of comments are detrimental to the sport and we handled it accordingly with him,” said NASCAR spokesman Kerry Tharp in a media statement.

That just might be a topic for Mike Massaro and Ricky Craven on a special edition of NASCAR Now on ESPN at noon. This show follows an hour of Camping World Truck Series practice over on SPEED. Craven has been on the money with his comments and this has really been a breakout season for him as an analyst.

ESPN2 hosts back-to-back Nationwide and Sprint Cup practice sessions at 1:30 and 3PM next with Marty Reid and Allen Bestwick leading the TV teams. SPEED is next and keeps the TV ball right up through the truck race at 8PM.

One highlight of the day is the return to the air of the NASCAR on FOX trio of Mike Joy, Darrell Waltrip and Larry McReynolds for Sprint Cup Series practice. After this long off the air, you know Waltrip is going to have a lot to say.