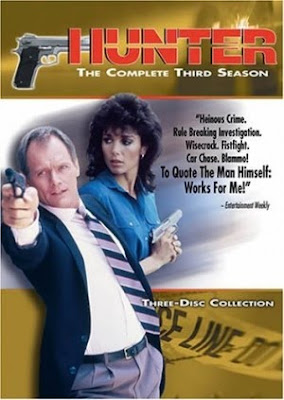 "Boys have at it" was the motto of Sgt. Rick Hunter and the rest of his LAPD Homicide detectives long before it became the NASCAR slogan. Along with sidekick Dee Dee McCall, Hunter patrolled the streets for NBC from 1984 to 1991.

It's going to take a veteran team to investigate the NASCAR on FOX production of the Sprint Cup Series race from Darlington, SC. You must be tough, because FOX has decided to go on the offensive and fight back.

Last week the headline was the JGR crew chief swap that never happened and this week it was the supposed fight in the NASCAR hauler between Ryan Newman and Juan Montoya. Darrell Waltrip interviewed Newman as a part of the pre-race show. Chris Myers hosted with Jeff Hammond as the second studio analyst.

Waltrip avoided the topic he made famous last week and instead played the supposed feud for all it was worth. Just like the crew chief swap, the feud story never materialized once the race was underway.

FOX also is suddenly in love with team scanners. This type of content has been featured on shows on ESPN and SPEED for years. FOX ran a scanner-based feature and discussed the language and tension that have suddenly found a place on these telecasts.

This race was part of a special "Animation Domination" promotion on the part of FOX. The opening animation and bumpers into commercial had the special network theme and the music, although horrible, was part of the campaign.

The original centerpiece of the week was supposed to be a combined show featuring characters from Family Guy, American Dad and The Cleveland Show. The theme that combined all three was that they got hit by a huge tornado. That special was wisely postponed due to the recent killer tornado outbreak, but the animation theme stayed with the other programs including NASCAR.

Hammond was back at the cutaway car and showed the foam in the sides of the cars that seems to come into play at Darlington. Once David Ragan hit Brian Vickers, Hammond was again outside and tried to explain with what he had available exactly what happened.

Mike Joy directed traffic with his usual skill, but silence and the lack of old style race calling was the order of the day. Like it or not, casual monotone conversation in the TV booth has become standard for FOX. While cranking it up is nice, an exciting race call from start to finish would certainly be a big change.

It's a sore subject to some, but Waltrip is having a tough time staying on point and remembering what he has said in the telecast. He now contradicts himself constantly on issues from troubles on the track to drivers having a good or bad day.

If this was an occasional error it would be one issue, but it is a consistent problem and often puts Waltrip in a bad light. He seems to not remember in the late stages of a telecast the very strong statements he made in the early laps.

Replays are mandatory to see the action on the track when the "hyper-tight" coverage style of FOX continues. From cutting to single cars and even in-cars during a live wreck to constantly showing two-car battles, the perspective for fans watching on TV is lost. Replays often show things that the FOX announcers never even referenced live.

While Steve Byrnes, Krista Voda and Matt Yocum delivered another strong performance, it was Dick Berggren who seemed to be out of step in the event. From awkward pre-race interviews to little real information in the telecast, the veteran had a tough night. His post-race interview with Kevin Harvick was atrocious.

Pictures and sound were the strong points as the technical side of the telecast delivered flawlessly again. Say what you will about some of the strange production decisions this season, but FOX has been outstanding from a technical perspective.

The restart with five laps to go allowed FOX to finally use an aerial shot to show fans the cars sorting out. When the big wreck occurred, FOX chose to zoom-in on Clint Bowyer and missed the key incident of the race between Harvick and Kyle Busch.

Waltrip was unable to assign blame for the accident, despite the fact that the hard feelings continued through the finish. The unlikely winner Regan Smith had been categorically ignored by FOX all night long. Luckily, Matt Yocum asked a fantastic opening question in Victory Lane and it made up for a lot.

The action after the finish forced FOX to try and follow two stories at the same time. While Smith was heading to Victory Lane, Harvick was exchanging thoughts on the race with Busch. It seems that was a bit much to cover and it made for a strange end to a very long telecast.

It is, however, a perfect example of the strange season for FOX. Cutting live to tight shots and in-car cameras as wrecks are in progress. The producer and director trying to catch some dramatic video instead of showing fans watching on TV what is actually happening on the track. It might be their choice, but we are the ones having to live with those consequences. This season on FOX, NASCAR fans miss a lot.

We invite your comments on this topic. To add your summary of the FOX telecast, just click on the comments button below. This is a family-friendly website, please keep that in mind when posting. Thank you for taking the time to stop by The Daly Planet.