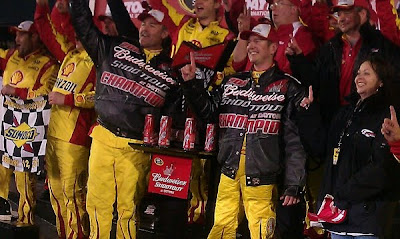 The NASCAR on FOX gang made no changes in the off-season and is bringing back the same on-air group of announcers. Some folks find that makes a lot of sense while others wonder why no changes if the sport is struggling on TV.

Darrell Waltrip is the leader of the pack and has the high-profile assignment of being on both the pre-race show and in the booth for the race. Waltrip is one of those love him or hate him kinda guys. There is no middle ground with DW.

Mike Joy had a tough year in 2011 for one reason. Waltrip was given the green light to talk over top of Joy anytime and he certainly used that right on a continual basis. Joy wound-up fading into the background for the first time in a long time.

Larry McReynolds is a lightning bolt for fans these days. Two years ago he gave an interview critical of NASCAR and then got rebuked by the powers that be in the sport. Since that time he has been nothing short of a public relations employee. During this season's media tour, McReynolds took the time to tell the assembled reporters to make sure and keep their message positive. It did not go over well.

Jeff Hammond has been great on SPEED in several different roles but on FOX he is shoved into the Hollywood Hotel and hung-out to dry when the race starts. Hammond has a lot of offer and it should be interesting to see how much he joins the telecast during the racing action.

FOX has a great group of pit reporters. Dr. Dick Berggren, Krista Voda, Steve Byrnes and Matt Yocum are all stars with the fans. It's a shame that FOX does not use them much because Waltrip is a constant source of conversation during green flag periods. FOX suffers without field recaps and regular updates from pit road on key stories.

The Shootout is a small taste of what NASCAR on FOX will be bringing to the table this season. Look for some new graphics, a new in-car camera angle and the continuing emphasis on dramatic storylines. After the rough ride of last year, it should be interesting to see how the fans react to the coverage tonight.

We invite your comments before, during and after the telecast. To add your opinion, just click the comments button below. This chat is geared toward the telecast, not the teams, drivers or racing action. TDP is a family-friendly website, please keep that in mind when posting. Thank you for joining us.