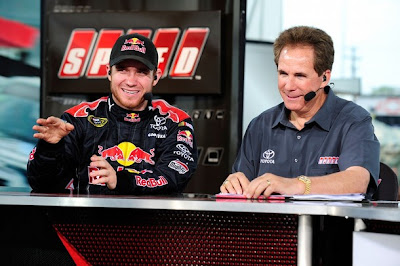 It had to come sooner or later. Darrell Waltrip's younger brother Michael is one of the greatest NASCAR tweeters of all-time. Long before Twitter became the cool thing to do in the sport, there was Mikey!

Pictures of socks, sponsor products, TV shoots and almost anything else that was swirling through his rather unique mind seemed to find its way on Twitter. Waltrip now has over 33 thousand folks following him on his @mw55 social media journey.

Now, big brother has signed-on with the name @AllWaltrip. Darrell got the hang of things rather quickly and noticed that Twitter is kind of catchy.

Certain traits might just run in the family. Before long, Darrell was talking about the final Gordon pitstop in Las Vegas, his sick hound dog and Geoff Bodine's Olympic bobsleds. As Waltrip got the hang of it, things began to mushroom.

Here are some fun DW tweets:

About his TV viewing: Better get to bed, time for O'Reilly, he's good but I'm starting to dig Glen Beck!

About his endless chatter: People say "you sure do talk a lot." May I remind those people I get paid to talk a lot. A picture AND a thousand words, no talk...no pay.

About Junior's nickname: I call him Junebug because when he was a little boy that was what me and Big "E" called him. He told me I was the only one that could do that.

About his Daytona outburst: I just like a good race, an exciting finish. There are times when I just turn into a race fan. Shake and Bake baby that's what DW cheers for.

About today's race schedule: My favorite tracks have always been the short tracks. Big mistake taking them all off the schedule, they are the backbone of the sport!

About Twitter: I've become a Twitter junkie in just a couple of days. I've got to give it a rest, but it sure is fun!!

Last season saw Kyle Petty take his cell phone to the TNT announce booth and use Twitter to interact with fans during the live TNT races. This season, Petty has been tweeting during his various appearances on SPEED shows, including RaceDay and Victory Lane.

That kind of naturally leads to the question of the moment. This Friday, Waltrip will be on the air from Atlanta Motor Speeway. He will call Sprint Cup Series practice, qualifying and appear on Trackside. Now armed with Twitter on his trusty cell phone, will Waltrip interact directly with fans during the time he is on the air?

Thursday on ESPN2's NASCAR Now program, host Nicole Manske had Jimmie Johnson answer Twitter questions that NASCAR fans sent in shortly before the program. They were a lot rougher than many journalists are used to asking the champion. Johnson had a great time with it, that was clear.

One thing Twitter does is open up for people like Waltrip the reality around them that they are sometimes insulated from discovering. Simply by giving fans an opportunity to offer feedback directly, perhaps some priorities might change.

Some female fans on Twitter were not very kind when it came to Waltrip's antics with Danica Patrick on the Trackside show. Had Waltrip read their words, he might keep those comments in the back of his mind for the next time he interacts with Patrick.

Certainly, the viewpoints of those fans are not right or wrong. They are just opinions. The key to Twitter is when something happens on live TV, you get to know how viewers react almost instantly. It's like the NASCAR Fan Council with instant voting.

So while TV personalities from Wendy Venturini to Kenny Wallace tweet from the track this week, it should be interesting to see if Waltrip jumps in the deep end of the pool or puts his instant fan feedback gadget in his pocket. This will be one experiment that anyone can watch. Twitter is easy, free and worthwhile for NASCAR fans.

We would like your thoughts on this subject. To add your opinion, just click on the comments button below. This is a family-friendly website, please keep that in mind when posting. We are also on Twitter at twitter.com/TheDalyPlanet. Thanks for stopping by.
Posted by Daly Planet Editor at 5:00 AM 37 comments: