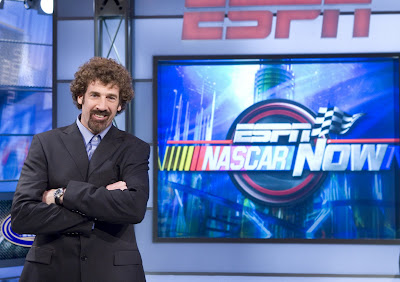 The familiar voice of Allen Bestwick welcomed ESPN2 viewers to the first NASCAR Now program of 2009. It was Ed Hinton, Marty Smith and Boris Said who sat on the Monday panel with Bestwick.

The mandatory review of Jimmie Johnson's championship was followed by a Mike Massaro update on the new Sprint Cup drivers and teams. All of the panelists then agreed that Tony Stewart's new role as an owner would be one of the top stories of the year on the track. The three also agreed that Stewart would make The Chase.

Then, it was on to the economy and the issues that fans needed to hear. NASCAR Now jumped into this topic. Bestwick called the economy the top story for NASCAR and led the panel into a wide-ranging discussion.

Said talked about the struggles of small teams to get sponsorship, including the one he co-owns. Hinton referenced the "start and park" teams that may appear at the tail of the Sprint Cup Series fields this season. "It will be a common man's sport again," said Hinton. "You only need thirty cars to have a good race."

"It has made guys happy to have work," said Smith of the economic crunch. He referenced the frequent "team hopping" of crew members over the last several seasons as the salaries across the board in the sport continued to rise.

In a very interesting twist, ESPN continued the pattern of making people pick things. All three panelists discounted Johnson for another championship because of the odds on four-in-a-row and made the safe choice in Carl Edwards.

In a very smart move, the show invited NASCAR President Mike Helton as a guest. "Everybody's concern is the economy," said Helton to start the interview. He used his decades of experience to put things in a very good perspective for the TV viewers. Helton was frank and open about "keeping his fingers crossed" that the sport gets through this crisis.

Helton's point was NASCAR will work with the current rules and regulations in order to keep the sport healthy. He said being a good listener and also proactive in these difficult times was going to be his priority for the year. The NASCAR business model continues to change.

Finally, Bestwick raised the topic of the Camping World Truck Series. Helton confirmed that there will officially be some rule changes designed to cut costs released shortly. New motor rules may also come into play for both the Camping World and Nationwide Series. This cost saving measure of using "sealed" motors numerous times on the track may well be the most important change for the two smaller national series.

Before he departed, Helton reinforced once again that NASCAR is conscious of the economic struggles of the fans. He was clear that NASCAR, the teams and the tracks are going to have to face a new reality where the fans are concerned.

"The character of the sport is at an all time high," said Helton, talking about the driver line-up. He teased the panel about their earlier discussion that some drivers were just "too nice" to make the Chase and be a champion. The only thing lacking in this entire interview was some questions to Helton from Smith and Hinton.

In a new feature for this season, Dale Jarrett presented his top ten personalities in NASCAR history. The list was interesting, as it included the former CBS Sports executive Neil Pilson. Jarrett paid tribute to Pilson's confidence in NASCAR that led him to authorize the Daytona 500 to be carried from start to finish on network TV at a time when no other races were televised live.

Jimmie Johnson was the next guest and he spoke with Bestwick by phone. After taking a little good-natured ribbing for his finger injury, Johnson said all the right things about the new season. He sounded just as focused as last year and wondered why no one on the panel picked him to repeat.

"I get a mulligan, don't I?" asked Bestwick after a rare on-air flub. Bestwick has worked hard to change this show into a premier NASCAR program for ESPN2. In many ways, it reflects his personality.

In letting the panelists have a closing comment, Smith talked about how Elliott Sadler will handle this season after his professional chaos. Hinton talked about just how wild Daytona will be because there has been no testing and this may be the season that a dark horse sneaks-up and makes NASCAR exciting again. Said echoed his earlier comments that this year has an underlying storyline of opportunity for smaller teams.

Bestwick wrapped things up by reminding everyone that those on his side of the camera know just how fortunate they are because of the bad economy. His point was that NASCAR is going to put on a show and everyone will try their best to get the minds of the fans away from reality for a short while.

The producers of this program series have come a very long way in two short years. This show had absolutely no hype and no forced advertising features. A new graphic showed the resumes of each panelist and Said stepped right up where his team ownership was concerned. This was a good start to a very long season.

The Daly Planet welcomes comments from readers. Just click on the COMMENTS button below and follow the easy instructions. The rules for posting are located on the right side of the main page. Thanks for stopping by.
Posted by Daly Planet Editor at 6:15 AM 41 comments: