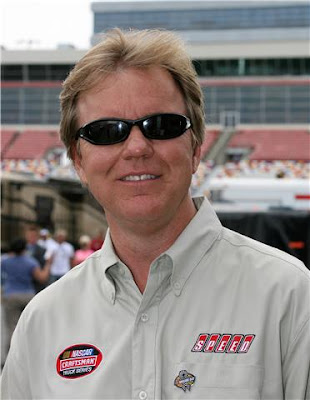 Here are some topics under discussion as we come down to the start of the TNT races on a weekend where NASCAR's top series are racing in Pennsylvania, Tennessee and Texas.

TNT has confirmed that Phil Parsons will be joining the network as a pit reporter for the six Sprint Cup Series races. Early feedback on this move has been mixed. While casual fans may not be in the loop, hardcore fans certainly have strong feelings about Parsons making "starting and parking" in both the Nationwide and Sprint Cup Series a profitable personal business.

While others on TV like Rusty Wallace, Brad Daugherty and Michael Waltrip also own teams, those efforts involve racing for the win and not parking for a pay day. Parsons has Dave Blaney and Michael McDowell entered for Pocono, although both drivers have to make it into the field on time. There are 45 cars set to qualify.

Parsons move to pit road covers the spot many originally thought Adam Alexander would take. Instead, Alexander is upstairs in the TNT booth. This responsibility takes him away from SPEED, so Krista Voda will cover pit road for the three Camping World Truck Series races Alexander will miss due to his TNT duties.

We mentioned yesterday that Lindsay Czarniak was set to host the six TNT races. Now, in addition to those duties she will also be appearing on TNT's online RaceBuddy to offer recaps, updates and direct feedback from the telecast team during the race.

RaceBuddy is a hot topic and we got lots of feedback after yesterday's column. Here is some additional information and answers from TNT and NASCAR.com to questions you asked.

On the topic of RaceBuddy working on an iPad the news is not good. Originally, Apple promoted the iPad as being Flash-friendly. Click here for an outstanding article on what happened next. It turns out the iPad does not support any websites that use Flash technology. RaceBuddy is one of those. Sorry folks, but the only part of RaceBuddy that will work on an iPad is the leaderboard.

On the question of free team radio scanners. RaceBuddy will only have team radios from the in-car cameras that are being used on the application. NASCAR.com's Trackpass feature will be made available on Pocono and Chicago race weekends free to any users. That has multiple scanners. Also this season, the Gillett Young Guns sponsors will make a free online scanner available with two of the Young Gun drivers.

On the topics of what changed with RaceBuddy this season. The video portion will be almost 30% larger on the screen. There is a DVR function that allows fans to quickly rewind to create video replays. The leaderboard can be customized completely and so can a Twitter feed of NASCAR driver, team and media tweets.

Speaking of Twitter, the original leader of the Twitter pack Kyle Petty will again be interacting with viewers through his cell phone and Twitter in the TV booth. Last season I had the unique experience of sending Petty a question, having it answered live on the air moments later and then Petty send me a tweet in the next commercial break asking if he answered my question fully. That was an eye-opening social media moment.

Finally, this was offered by Darrell Waltrip on Twitter Tuesday night:

Read today that FOX needed to make some changes, we do races for everyone, not just a few that seem to think they know everything about TV!!

Speed is cable, on Sunday FOX is network, some people don't get both, so sometimes you repeat what you said because its a different audience!!

Sorry,just made me angry,we try to make sure if you tune in you'll learn something you didn't know and have fun doing it,I'm just sayn'!

We would like your comments on the topics above. To leave your opinion, just click on the comments button below. This is a family-friendly website, please keep that in mind when posting. Thanks for stopping by!
Posted by Daly Planet Editor at 2:00 PM 62 comments: